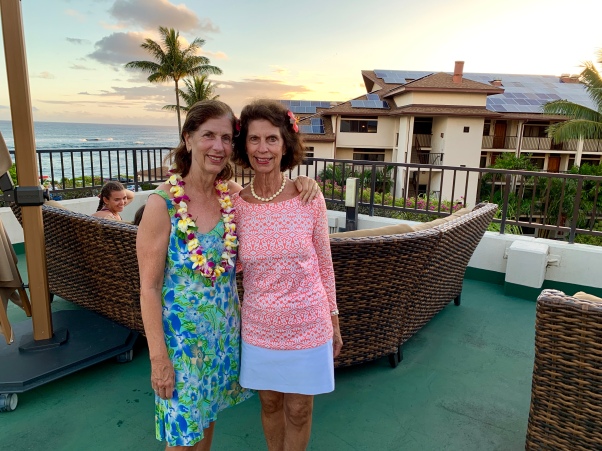 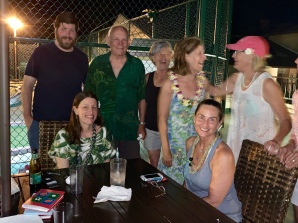 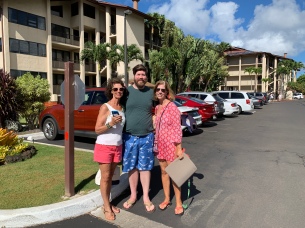 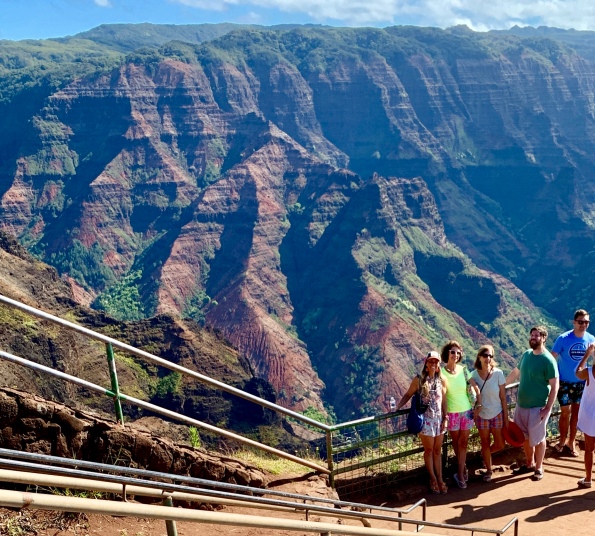 We’d all had almost a year to prepare for this goodbye, since Ben passed away in July 2018, but it was still hard to say it. And we were also saying goodbye to Liam, Ben’s grandson who passed away at age 14, in December 2017.

Aunt Pam had planned and fretted over the logistics, but in the end, it was a seamless ceremony at sea, held on a sunny afternoon at Poipu Beach on June 10, 2019. Those in attendance (my parents, my three cousins, my Aunt Pam and some close family friends of Pam and Ben’s) had flown in from all over the country bringing our love for Uncle Ben and young Liam with us. 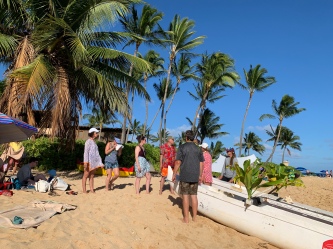 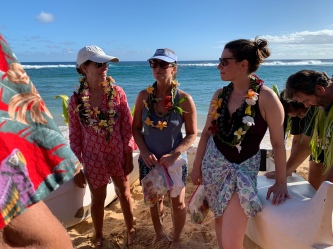 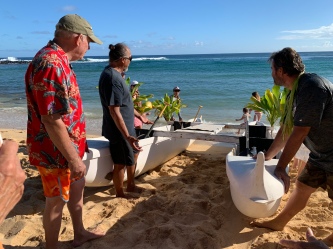 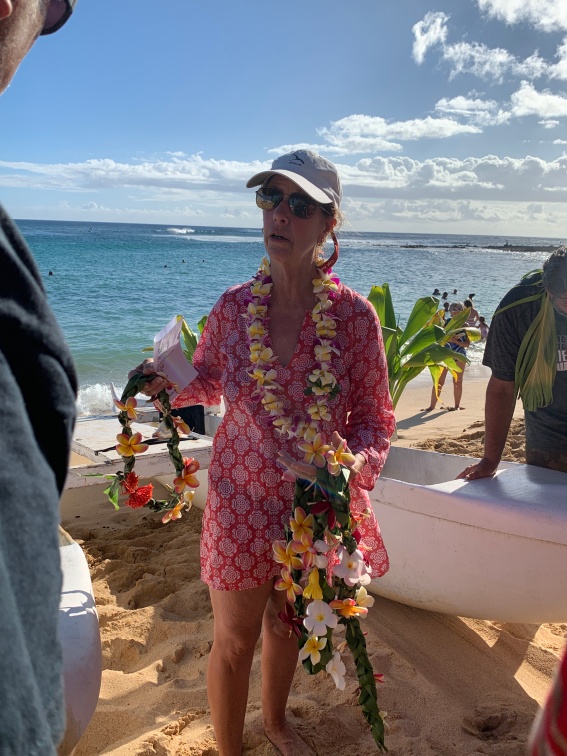 We all gathered on the beach around a bright white catamaran canoe, which was decorated with white plumeria flowers and bunches of tea leaves. 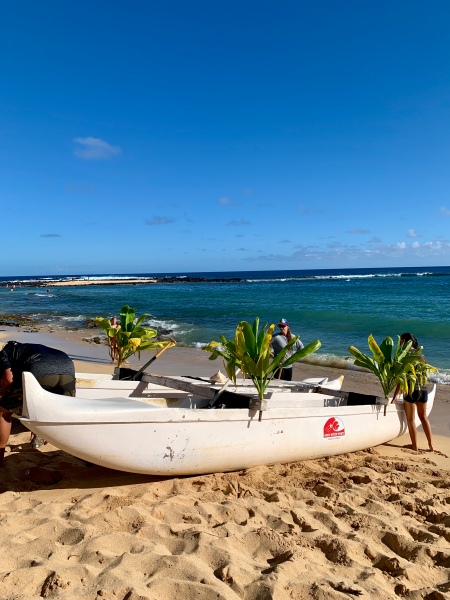 A conch shell was blown, signifying the beginning of the ceremony, orkapu. Ben’s three children and his wife boarded the boat quietly at the edge of the water, then the boat was pushed into the surf and the local owners paddled it straight out toward the horizon, stopping just shy of the big waves breaking on the reef. Ben’s best friend Bill sat in the center. 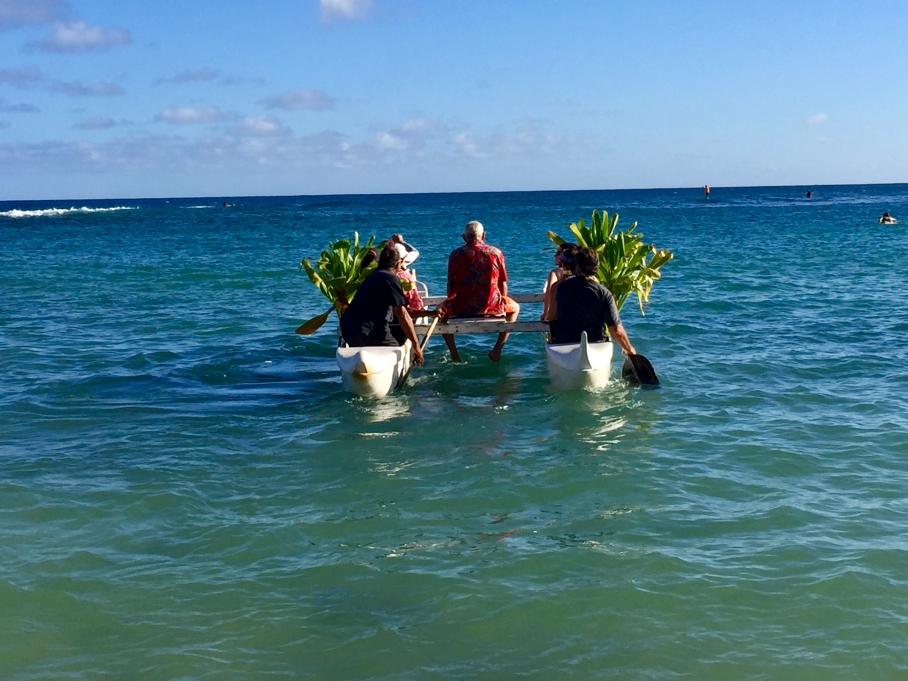 I swam behind the boat, trailing behind, but trying hard to keep up. I almost swam into a honu (Hawaiian green sea turtle) and then watched him surface to take a breath—a good omen. I took it as a sign of Ben and Liam’s presence. 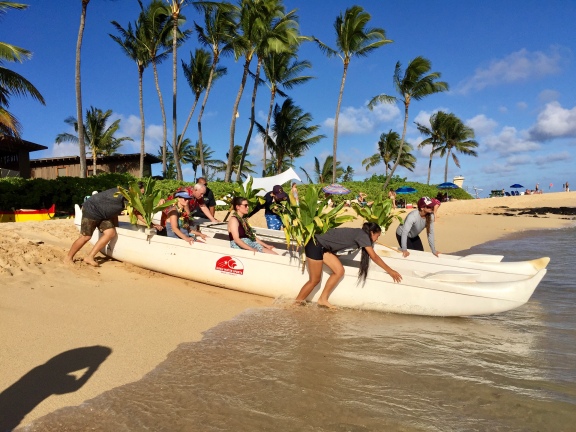 They stopped rowing and the boat was now facing me, staying sideways to the break. As I treaded water in the swirling warm sunlit green sea, I felt the rush of the surfers bearing down on us to my immediate left, along with power and force of heavy walls of water breaking onto the reef. Behind me I sensed the peaceful sleep of three monk seals on the island and to my right, I felt calmed by the sea turtle sentry circling silently in the shallow shoreline. So much of ocean’s glory seemed to be laid out before us. 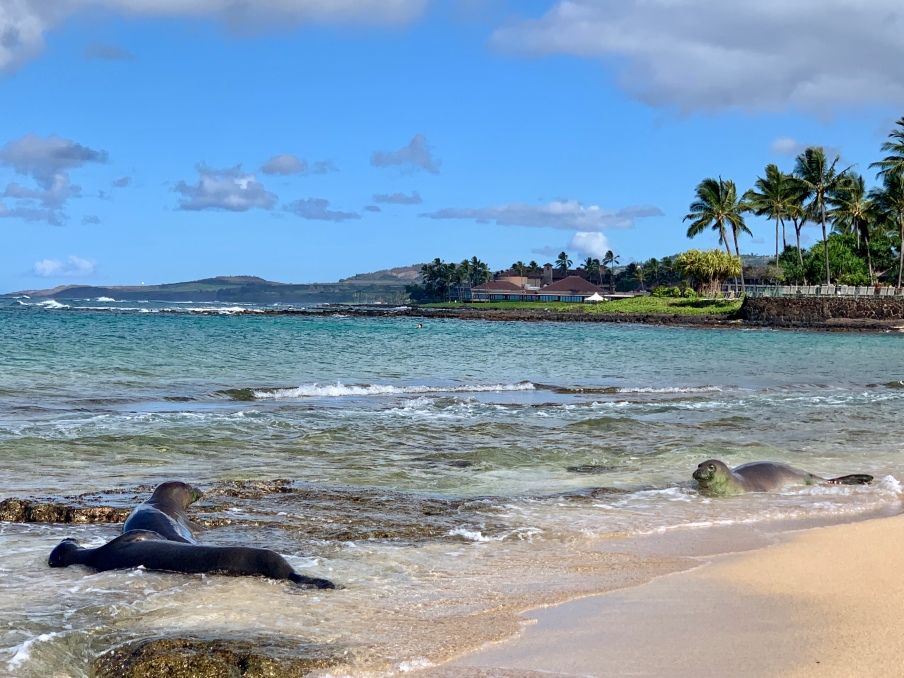 And directly in front of me, the catamaran canoe rocked back and forth in the choppy swirling water, with Kauai’s southern coastline fading off in the distance in pre-sunset glow. In the boat sat Ben’s wife and three children, silent and stoic and scared.  And Ben’s best friend, Bill, who was charged with the responsibility and honor of sliding off the wooden cross bar into the sea, to release ben and Liam’s ashes underwater.

I looked on as Bill lowered down into the water between the connected canoes. Then I watched underwater, as Liam’s ashes disbursed into prisms of sunshine that pierced the saltwater. Then it was time to say our final goodbye to Uncle Ben. I sunk down underwater again and watched as his ashes, the last of his physical being, were released into the gorgeous green sea. I felt quiet, and still, and sad. When I came to the surface everyone on the boat was silent. Then a huge set rolled in, and I thought the boat was going over. But it was OK. I had a sudden intense feeling that spirits had played a part in that set’s timing. 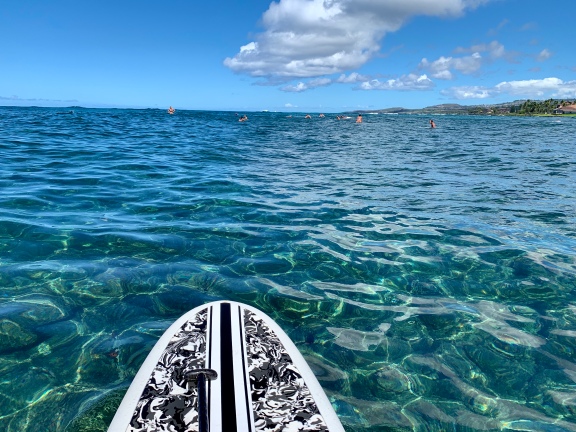 Then there was chanting, followed by the conch shell being blown again to signal the end of kapu. But everyone was still so quiet during the ensuing noa. Then the boat was steered toward shore.

I swam behind it, and when everyone finally got to shore there was a lot of hugging and crying. Ben and Liam were laid to rest. And there was a general sense of release and surrender and sadness, and peace. 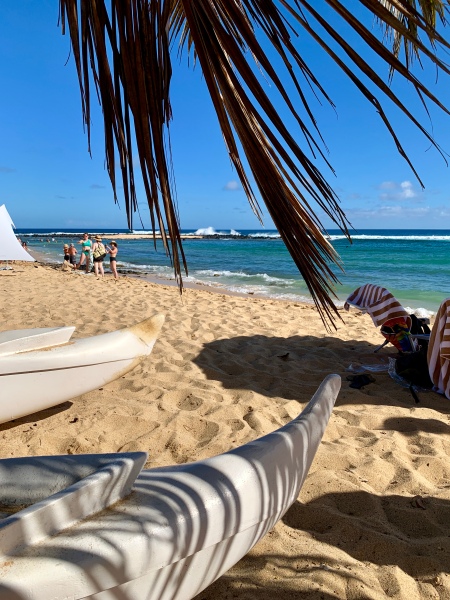 It had been a ceremony at sea of scared silent stoicism, befitting Uncle Ben, a scared silent stoic.  And just like him, there was chaos all around, from every angle, but there in the center of the storm his presence was felt: silent, scared and stoic.  And the ceremony site was special because it had been held where Liam had surfed. Liam, who passed into Heaven at the age of 14, just seven months before Ben’s own passing, had absolutely loved that place. 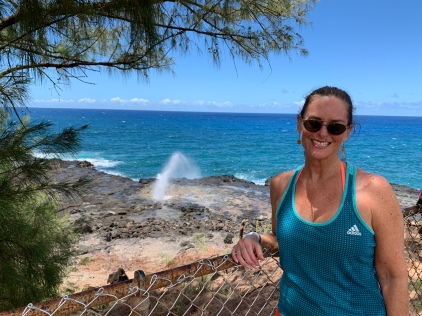 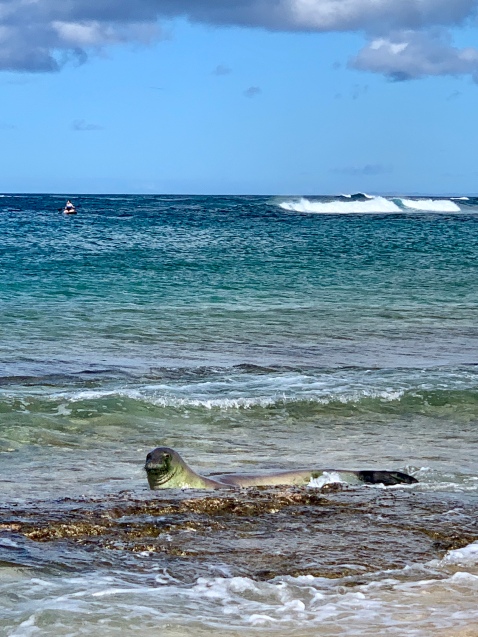 We gathered on a rooftop and spoke about Ben and Liam and read little readings and looked at old photos. We hugged and drank champagne and ate steak that Bill barbecued, and salads that Brendi, Pam and Debbie had made. And there was Debbie’s chocolate pistachio Bundt cake, Ben’s favorite. And we remembered. We packed everything up to go to bed, just as a light rain began. 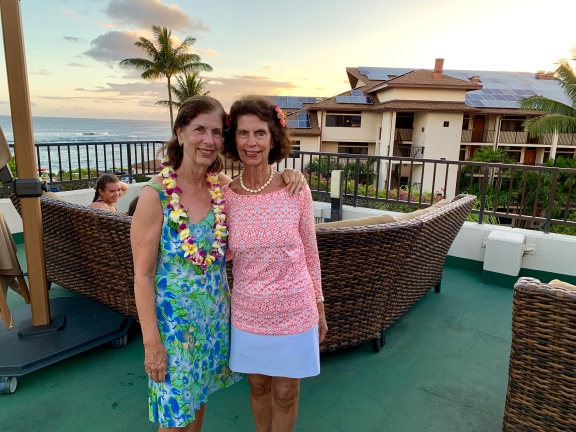 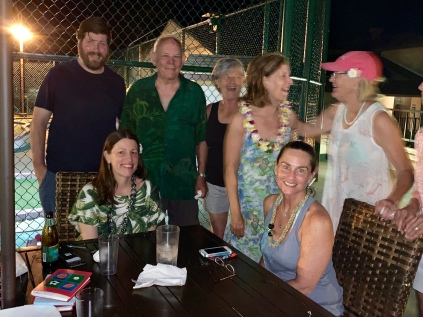 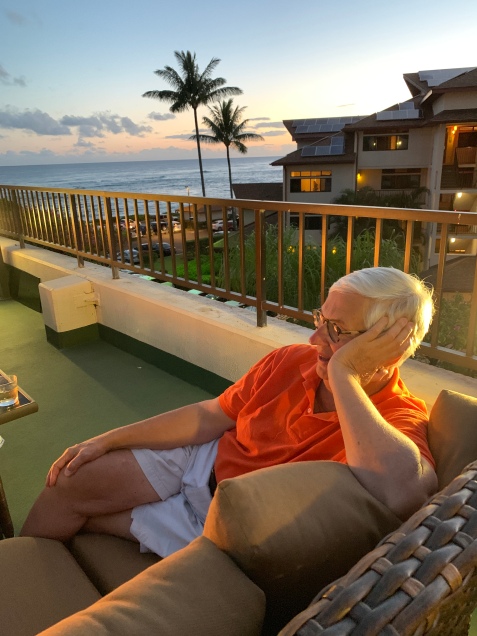 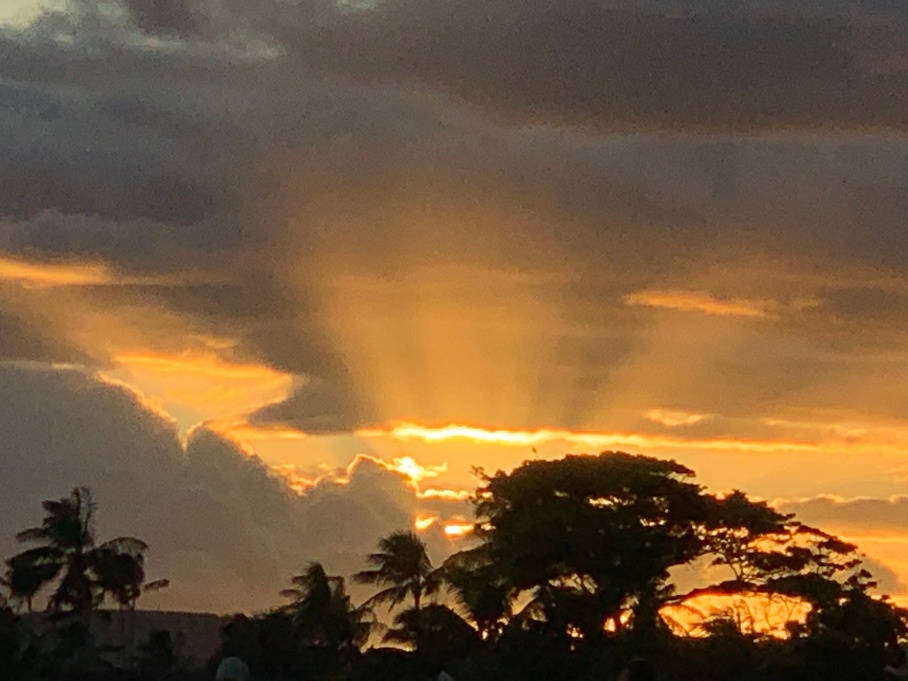 Uncle Ben was such a patient man. He was someone that I loved when I was a kid, just because he was family. But took my cousin Tanya and me on a great college visit to Brown when I was a teenager and I had the best time with them both. And have carried with me the fondest memories of them from that trip. When I thought of him, I would think “my uncle Ben who teaches psychology in Southern California and plays with train sets and model airplanes” That was what always came to the forefront, but I knew he was also a great professor, and a thinker. And that he reminded me a lot of Grandpa Newton.

Then I became a mom in April 1998 and cousin Christine came to help me the summer of 1999, just before Jeffrey was born, and she would always call home to talk to Ben for any kind of  “how do you fix this thing in the house?” support. Christine was so house-handy and she attributed it all to Ben. I was extra thankful and grateful to him for that expertise.

I remember on our world tour trips, the ones where I really got to know and love and appreciate his quirks and methodical ways, how much he helped me. Our trip to Northern Spain where he and dad drove the “prison van” and we all had such a good laugh in that garage up in Gijon. And on our trip to Istanbul, I will always remember that moment when he came running up the hill (very un-Ben) in a sweaty panic because he’d gotten separated from the group, then he broke into such sweet relief upon finding mom and Pam and me in the Mosque. And in Portugal, I loved watching him walk tall around the streets in that big hat to stay safe from the sun while he talked about his guns.  He always had a kind of cowboy way about him. He was picky and particular, and fastidious, but I grew to appreciate all of that about him.

But the thing I loved most about Ben was in the way that he talked. I tend to spin and be too hyperactive for my own good, and Ben had a way of calming me down with his monotone voice and long-winded professorial diatribes. It didn’t seem to matter what the topic was, so long as he went on and on and kept the tone consistent.

I fought them at first, but at some point, on some trip, I realized it was like fighting yoga class. Ben was like was a yoga class. I’d fight to go, but once I finally went, I realized how absolutely fantastic and relaxing it was, and that it was exactly what I needed. I grew to love Ben for who he was, and for what he said, and why he said it, and how he said it—not just because he was family.

I was so completely devastated by last year’s course of events. Hopes were so high in April and May for a cure and full recovery. He was so upbeat as he described his upcoming “stem cell birthday” to me as I sat at his feet in his San Diego living room. Then the realization sank in during June that things were going the other way.

I deeply regret that I didn’t rush to JFK when I heard the news that he was on the way home from the hospital in July. I may not have made it, but I wanted to be there to say goodbye to him—this husband of my Aunt Pam, this father of cousin Christine and cousin Jesse and cousin Tanya, this grandfather to Liam, and to Thomas, this brother in law to my dad and father-in-law to Paul.  And, this dear friend to Bill and Debbie, Brendi and Don.

So I’m here today, in this very pretty place, with all of you, to say it “Goodbye Uncle Ben, I love you.”