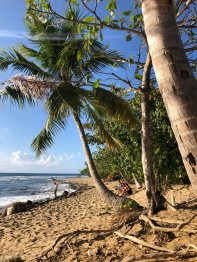 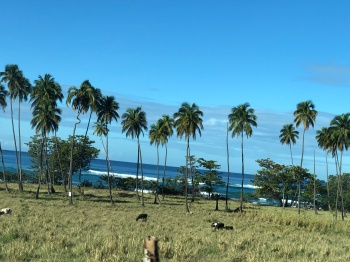 On arrival into Rincon, PR, this small surf town was eagerly anticipating the swell forecast for the following day. Swell Info predicted 5 to 7 feet for Rincon South. I woke the next morning to see some sets breaking overhead at Maria’s with about 30 surfers scattered about the break.

I felt fearful, as I often do, since I probably did not have any business going out there that day, but I’m so sorry Mom and Dad, I did go. I love it too much and I can’t seem to stay away from this intense sport that I fell in love with some eight years ago.

I managed to catch a few waves and I felt so good, and so grateful. Then after lunch I paddled out for a second session. I was alone at that point, but eager to join the lineup at Maria’s. At least that was my plan. 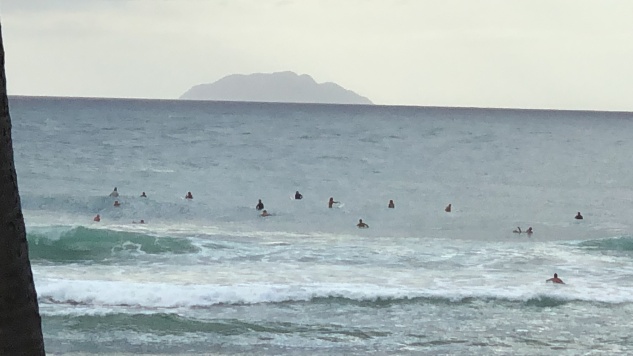 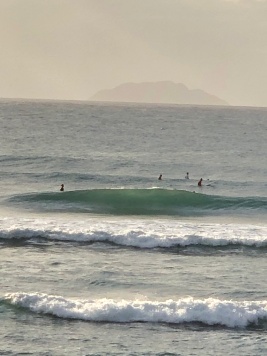 I entered the ocean at the keyhole, which is a small opening in the coral that edged the beach, then paddled out, heading toward Maria’s. I made sure to keep the pistons (an actual shipwreck’s engine pistons which stuck straight up out of the shallow reef), to my far left. I knew how dangerous it would be to get close to them. I was doing fine, or so I thought. The current and the swell in this easier area was much stronger than I anticipated.

I was pushed back toward shore by a strong breaking wave while the current pulled me further left than I realized, and all of a sudden my paddling was pointless. My 9’0” longboard would not move forward toward the lineup. I was suspended, stuck. I knew I couldn’t afford not to be moving forward right now. Waves were coming and I was in the highly precarious impact zone where waves arc up and crash down onto the very shallow coral reef three feet below.

I paused in confusion for a moment, then panic set in as I looked back and saw that the pistons were less than 2 feet behind me. I was literally on top of them, and the reason I could not move forward or get clear of them was because my leash had somehow fully encircled the left piston and was now holding me tight to it. Another wave of panic flooded me when I realized a wave was coming and would definitely smack me straight into both pistons.

I only had a split second to act to prevent a horrible injury. So I reached down to my left ankle and released the velcro of my leash.  Just at that moment the wave came and so I shoved my board to the right to get it clear of the right piston just as I felt the force of water propel me up, over and between the two pistons, toward shore.

I had gotten free. I was now closer to shore, with the pistons safely behind me. So I hucked myself back on my board with the leash dragging loose behind and paddled as fast as I could to cross back through the keyhole and onto the beach. I then raced to wash my coral cuts and catch my breath. I was shaking from my close encounter and feeling awash with shock and gratitude that I had escaped such a close call.

I was in the middle of scrubbing my hand, and hadn’t even gotten to the slice on my back yet, when I suddenly heard a cry from the beach. It sounded either angry or scared. I couldn’t tell which, but either way it sounded serious. So I ran over toward the voice. I saw that it was a surfer bobbing on his short board in the water, very close to shore, yelling “Call 911!!!”

Already at a high level, my adrenaline spiked.  I had friends still out there surfing Maria’s.

A guy on the beach called 911 and several others began heading toward the water’s edge. On the horizon we could see a mass far out in the water, moving toward shore. The mass was slowly coming closer to where I was now standing, at the keyhole I’d just used to exit the ocean. 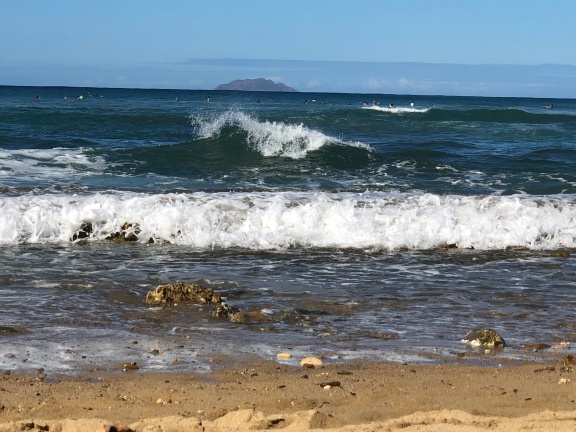 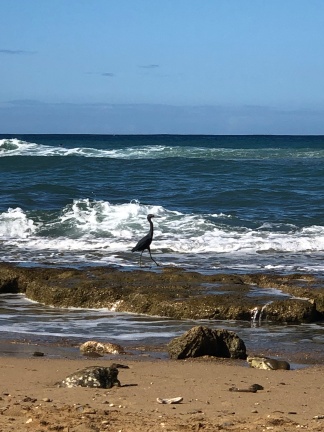 The mass was now close enough to make out. It was a cluster of 7 to 8 male surfers helping to propel a body lying on a surfboard. I whimpered and watched, helplessly as they hoisted this heavy, unconscious male body wearing just a pair of striped swim trunks across the coral threshold of the keyhole.  One of the guys carrying him yelled “who knows CPR?” and a small brave blonde woman jumped up and said “I do!” Then they lay him down in the wet sand. It was such a dire sight to behold. I felt yet another wave of adrenaline.

The woman began chest compressions and mouth-to-mouth resuscitation on him, this wet sandy surfer without a name. He had a cut on his forehead and his surfboard lay abandoned nearby on the sand.

A big circle gathered and so many different people worked tirelessly with chest compressions and mouth-to-mouth. All these good Samaritans were hoping and waiting for a sign of life. When white foam spewed from his mouth and also from his nose, I felt a burst of hope. His eyes were slightly parted, gray and sandy. I noticed that his belly rose as the CPR continued and everyone kept taking turns with the chest compressions and the breathing. But this unnamed surfer was still not coming to.

Someone asked for a defibrillator and so I ran like crazy to look for one, but had no luck. My adrenaline was on overdrive now and it was making me run circles, touching the shoulders of this group in support and solidarity as the life-saving efforts continued.

The ambulance finally came, after about 15 minutes, and took him away on a stretcher, breaking up our circle of hope and help. Many of us followed the paramedics to the parking lot of Maria’s Beach, then told the paramedics what we knew and what we had seen.

It was at that point that one guy stood beside me and said his full name. He then told them that he’d been the one to find him, in the dangerous impact zone of Maria’s break, floating facedown still attached to his surfboard with his leash. I had chills. It didn’t explain what actually happened to him, but it somehow gave more clarity. 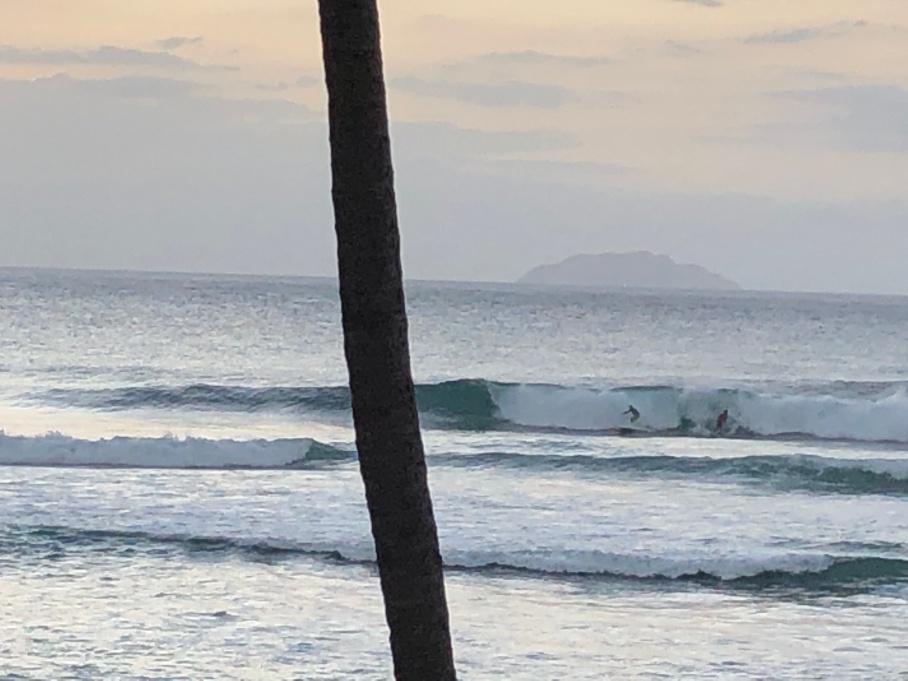 Then a young woman offered me a hug on the beach and I was so moved by the support of this surfing community, with all that I had witnessed up till now, and then with this hug.

A few hours later, many of us were standing at Calypso Bar overlooking Maria’s beach, where live music played loudly.

We heard from a local guy that his name was Poncho, he was from San Juan, and he was a great surfer. And yes, he’d died.

Why? What happened out there? Over the next two days I heard “a paddleboard hit him,” then, simply, “he drowned,” then “he had a brain aneurysm.” All I knew was that this man was gone. And perhaps the most likely scenario was that a surfboard struck him in the head in the mayhem of Maria’s, causing him to lose consciousness and drown.

It was awful. It had also been beautiful to witness how a community had come together to do everything they could do to save this stranger, this fellow surfer.

My tiny coral cuts and near miss at Pistons was a faint blip, put in sharp relief to such a larger tragedy.  And on this big wave day in Rincon, my being prevented from joining that lineup might just have been a blessing.

I surfed for the next several days, with coral living in my hand and constant thoughts of a life taken at sea.