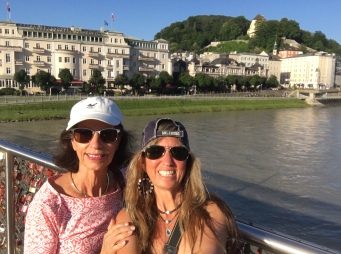 Holy cow, we did it, we saw a sizable amount of Salzburg in just under 36 hours! We hit the ground running, arriving by train from Vienna (209 miles to the East) into the sparkling station, set against a Bavarian alp backdrop that took our collective breath away. 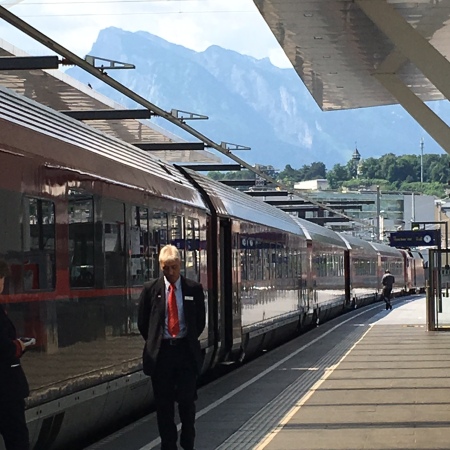 We taxied over to the Old Town (Altstadt), cradled by the Monchsberg mountain ridge on the left bank of the Salzach River, taking in the stunning 17th and 18th century steepled skyline of this festival city famous for Mozart and The Sound of Music. We checked into the quaint and lovable Hotel Goldener Hirsch at Getreidegasse 37, just a few doors down from Mozart’s house of birth. Oozing with character and luxury, the hotel was in a prime location and made us all, from teens to septuagenarians, feel “Austrian cozy” in an instant.

After settling into our spectacular Alpine rooms (#53 and 39) we took off to climb around Saint Peter’s catacombs, cut into the rocks of Monchsberg, and check out the abbey. We photographed and skulked our way through squares and past horse drawn carriages, winding alleys and outdoor eating spots, soaking in the scenery and feeling that out of body sensation and timelessness that only travel within foreign countries can create.

We chose to ascend in the Funicular, in place since 1892 and an attraction in its own right. We had no wait time, which in the height of European summer season, is nearly unheard of, then rose effortlessly and in total style. 43 seconds and bam, just like that, we were inside the commanding fortress known as “Festung Hohensalzburg.” 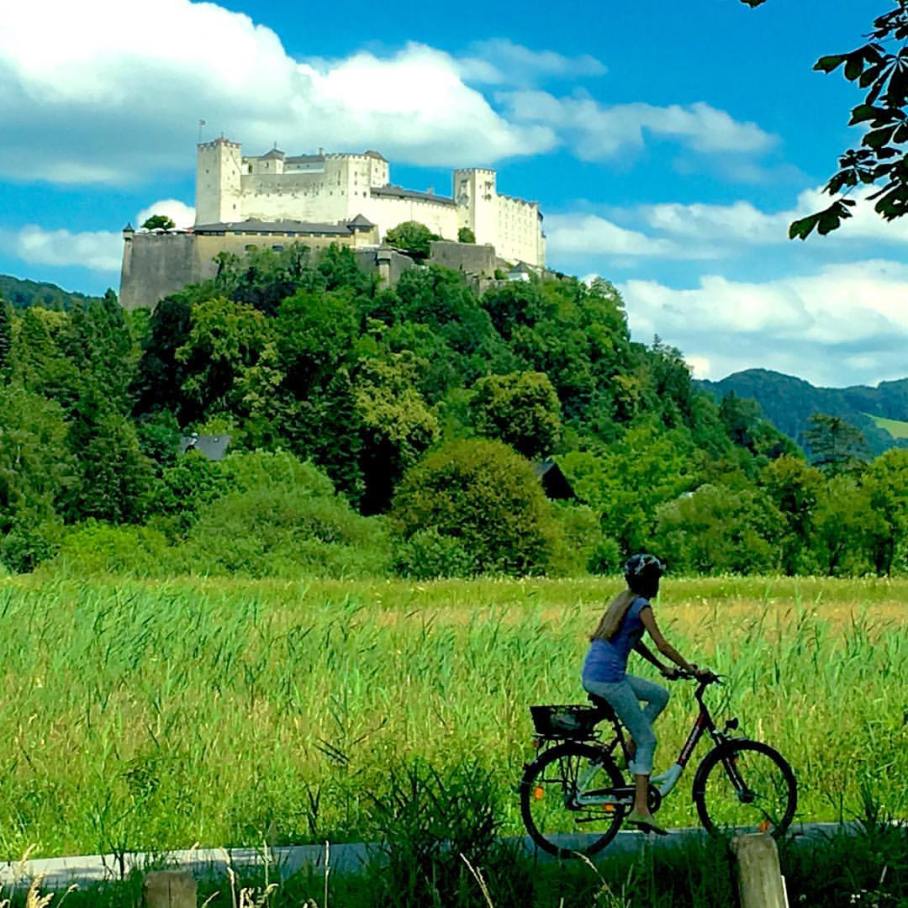 Begun in 1077 and then expanded over the following centuries, it is one of the largest medieval castles in Europe. We wandered and explored, winding ourselves further and further up until finally, we could go no further. My bum knee complained a little, but the commanding views served to quiet it down quickly.

The Rainer Regiment, Fortress and Marionette museums added to the well preserved interiors and atmospheric courtyards, forcing us to savor the Austrian essence, flavor and slower pace of the place.

Then my mom and I found ourselves in the top turret, taking in the 360 degree views of  mountains, swift running rivers, valleys, castles, and steeples of the storybook village of Salzburg and its environs. We were so high up and barely able to contain ourselves with such gorgeous views. We took panoramic photos and videos on our iPhones, in vain, to try to capture the magnificence.

When sated, at last, we climbed back down to wander our way back to the hotel, which had a great shower and a stunning fortress view from its little square stone window. We charged dead phone batteries and then rushed over to sit in amazement during a performance of Mozart in Residenz, at Kuenburg Hall, to soak up Salzburg’s claim to fame, Mozart.

Classical music filled our souls and spirits, and then just as we were settling into the calming Austrian rhythm, we snuck out early and raced (like the Americans that we truly are), to catch the 6pm boat, running along the riverside bike path like we were escaping a fire. We nearly got hit by relaxed, bicycling locals, just before we hopped aboard the scenic tour boat, in the nick of time.

The boat ride was worth the rush though, and it gave us a great overall view of Salzburg and the surrounding alps. As we sped up and down the river, we enjoyed the vistas and especially loved sitting in the back of the boat while the captain set it spinning against the fast currents.

After the boat tour we made a quick pitstop back at the hotel before ascending an elevator built inside the rocky Monchsberg ridge, to reach a breathtaking view at the glitzy bar and restaurant venue of M32 (also the location of the Modern Art Museum). We drank Austrian amber beer and reveled in the grand scenery and the minimal crowd. 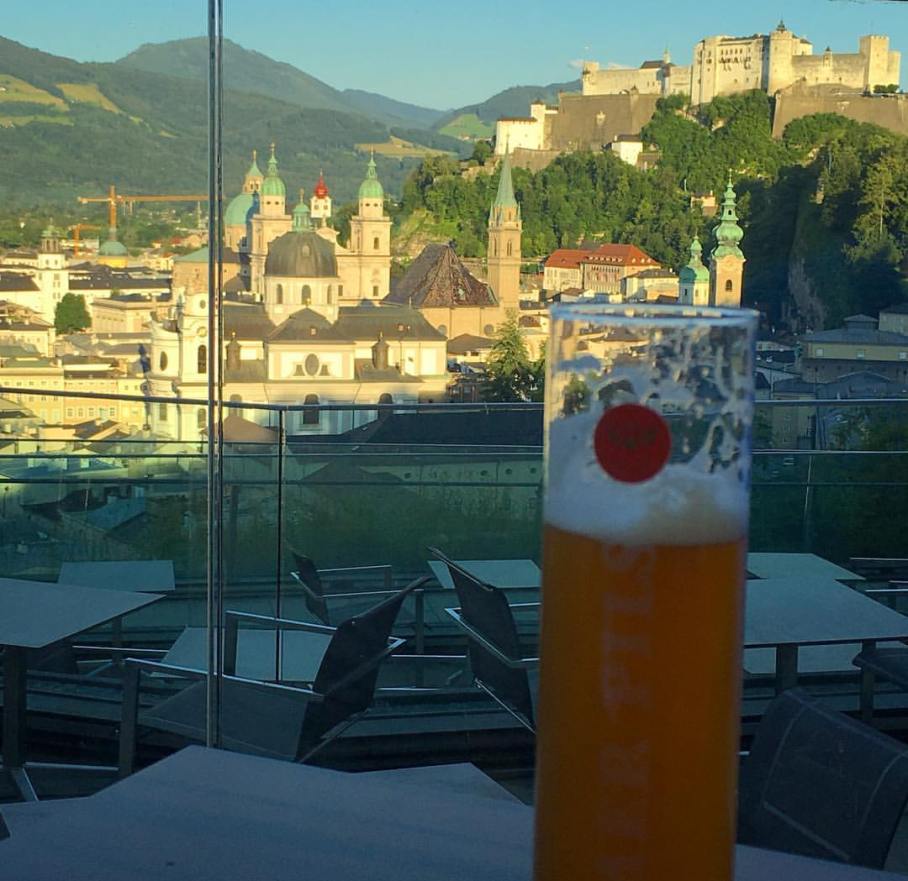 After drinks, we hit St. Peter Stiftskeller, the oldest restaurant in Europe, started by Benedictine monks in 803AD, to dine alfresco in cloistered bliss enjoying the best goulash in Austria where the ceiling frescoes were so beautiful they made me cry.

Following dinner we wandered around town in its evening glow, crossing the love lock bridge and checking out Hotel Sacher. We had the pedestrian streets, such as Getreidegasse, all to ourselves.

We watched the lights of the Fortress turn off at midnight, marked by church bell chimes. I fell asleep shortly after that, breathing in cool mountain air, still tasting the pistachio marzipan treat I’d found on my pillow. Scents lingered, damp hollow alley moss from Mozart Gate and horses from the clip-clopping carriages, wafting up to find me, as I perched in a small square red-curtained Austrian window, feeling time stand still, gazing at the church spires and domes, feeling so beautifully insignificant.

We woke up the next morning, recharged. I had an awesome run thru Mirabell Palace and Gardens and past Mozart’s Residence and even into Holy Trinity Church. Then I wound my way over to search for the “YOHO” youth hostel that I remembered so fondly from a brief New Year’s Eve stay in 1989 while backpacking during college with my best friends, Joanna and Ellen. To my amazement, I found it. It has been 26 years, but there I was again, standing inside it, at Paracelsusstr 9, taking photos and texting them to Joanna and Ellen. It was such a great full circle feeling. I ran back to have a coffee and toast with Nutella with my family in the hotel restaurant, set in a historic vault, also a former horse stable.

Fueled up, we took to the souvenir shops on Getreidegasse and Residenzplatz to load up on dirndls and lederhosen from Trachten Wenger,

We definitely got our fill of beer steins, cow bells, aprons and Austrian outfits, that’s for sure.

We then hurried to drop our treasures off at the hotel before starting off on a private tour with our guide, Deter, who piled us all into his van and whisked us off to Mirabell gardens where we stood on the top of the steps, just as Julie Andrews had in The Sound of Music, to admire the flowering gardens.

Then we headed off to see Leopoldskron Castle, which was depicted as the von Trapp family home in The Sound of Music movie. Audrey sat with the ducks and we all relaxed for a brief moment.

We then headed to Hellbrunn Palace to spend a little time with the actual gazebo from the movie. My mom pointed out that Jeffrey is 16 going on 17, just like the famous song described, and so we took pictures of the kids in front of the gazebo

and then got back in the van to drive up into the hills.

And we all piled out to prance around in a field, singing “the hills are alive,” a la Julie Andrews. 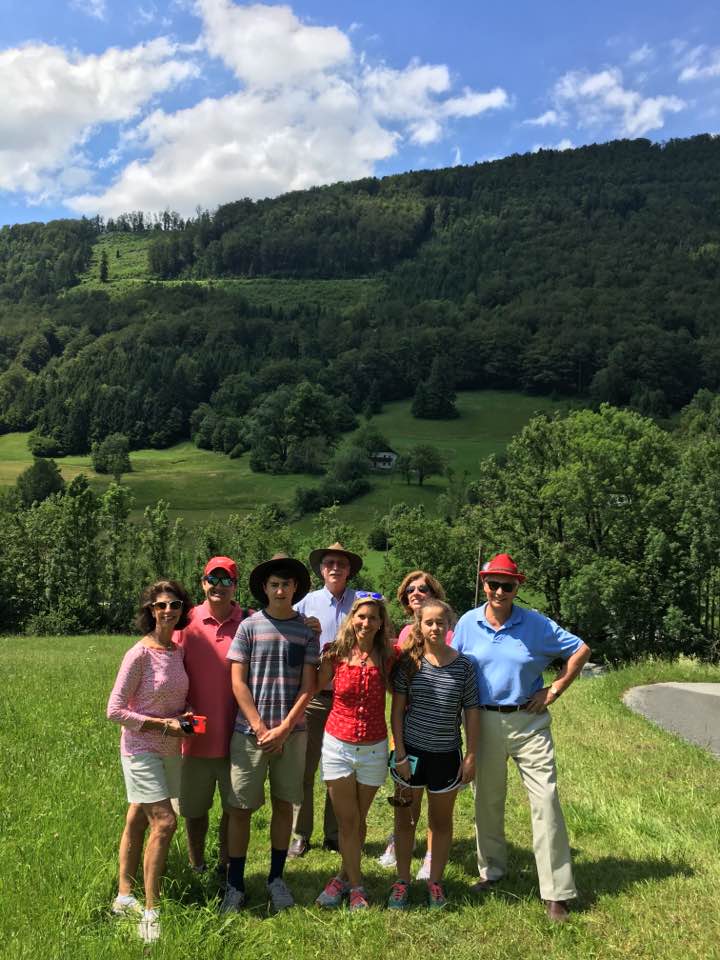 Then we took off toward St. Wolfgang and St. Gilgen to admire Lake Wolfgang’s emerald water and the surrounding alps.

Listening to the Sound of Music soundtrack while driving up into the mountains was just the BEST. It mellowed us all out…transforming us from angst-filled Americans to melancholy-filled European mushes. My dad was humming. Audrey was sleeping. Jeffrey was smirking and wearing that goofy hat. Pam and Ben were just chilling in the back and mom was singing along to the music. Rob was relaxing, smiling inside, I’m sure, probably mostly at the thought of me in a dirndl twirling through the fields of edelweiss like a loon, channeling my inner Julie Andrews in true cult film fan-ness.

All that Sound of Music song-singing I did when the kids were toddlers finally paid off, because while alp-ascending, I could feel a powerful head cocking coming from the backseat due to the recognition and comfort of songs harking back to their jogging-stroller days. Days when I could sing Do Ray Mi and Edelweiss, off key, to my heart’s content, and THAT was their entertainment. Whether they liked it or not, this music and this movie was inside of them. I’d put it there, instilled it deeply early on, when they couldn’t fight me on it or tune me out with their iPhones. And I was glad for it.

Now here we were prancing around Austria and they were quieted and calmed by the music and the majesty, in spite of themselves. Kids, it’s still in you, and now you have traveled into the birthplace and heart of the story, and the birthplace and home of Mozart too, for that matter.

The Sound of Music is timeless and romantic. It is a classic film that I loved as a child. It is filled with such powerful messages of  hope, change, and the importance of family and pride in one’s country. May we have a little Maria and a little von Trapp in all of us.

Salzburg gave us everything. Scenery, souvenirs, fortresses, cathedrals, abbeys, gardens and river fun. But mostly it gave us music and even gave me a throw back to those carefree college backpacking days, with that YOHO visit and also with the compartment-style train ride back to Vienna. 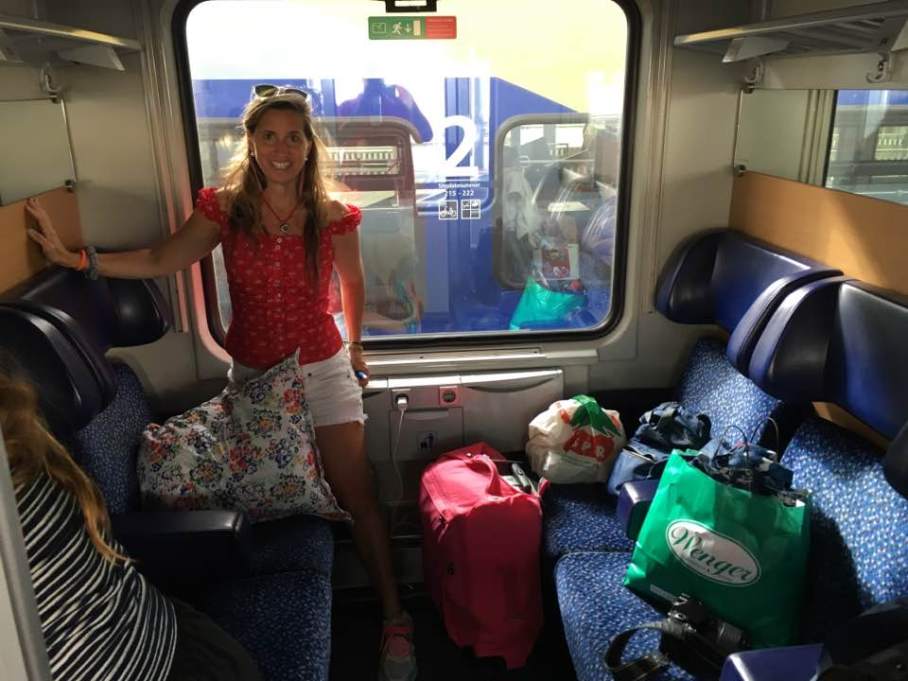 It gave us good old-fashioned family fun and great bonding with music sung about making music. And all with clean crisp mountain air, blue skies with puffy white clouds and glistening cathedral rooftops. It left us enchanted, and in just under 36 hours.

Epilogue: This trip was taken June 2016 and on my next trip to Salzburg I vow to: 1) stay longer 2) visit the Durrnberg Salt Mines 3) check out Eagle’s Nest, 4) see the ice caves of Eisriesenwelt 5) spend more time in the Lake District 6) go to a Mozart Dinner concert 7) attend The Sound of Salzburg Dinner show 8) get a Salzburg card to make getting around a little easier. Oh yeah, and slow down a little. 🙂 maybe…