It was March 13, 2017, the day of winter storm Stella’s arrival along the eastern seaboard, when we touched down in Nassau. The blue green waters were mesmerizing and everyone on that Jet Blue plane let out a collective sigh of relief. We had all escaped the storm and were now embracing the warm sunshine, balmy breezes and high humidity with relish.

After standing in an immigration line at Nassau airport teeming with other teens and their designated parental units, my high school senior son, Jeffrey, and I taxied to the behemoth Atlantis, Royal Towers. We took in all the grandeur of this colossal development on Paradise Island, which I’d always heard about, but had never seen. 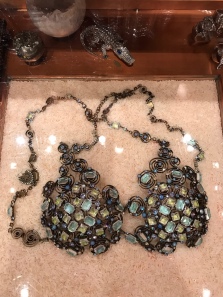 We walked into the lobby

to instant echoes of  “Hey Jeffrey!” Friends bounced off a bench in greeting. So I took my cue to exit and went to explore The Cove, where the moms were staying. My friendly seat mate on the plane had talked up a world famous ashram a short walk down Paradise Beach from The Cove, so that is where I headed. 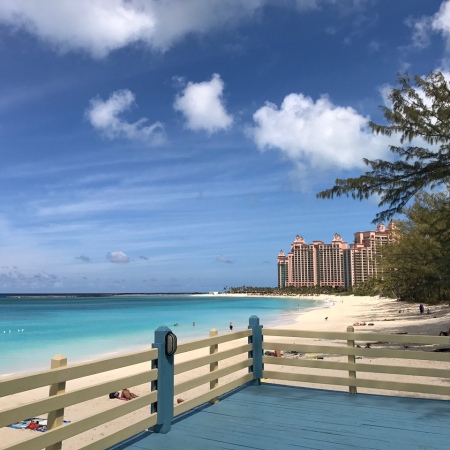 And I’m so glad that I did. Maneuvering through this calming labyrinth of seaside serenity and simple living nestled quietly between the behemoth Atlantis and the Cruise ship bustle of Prince George Wharf, was like finding an oasis in a desert. The irony was bubbling over. 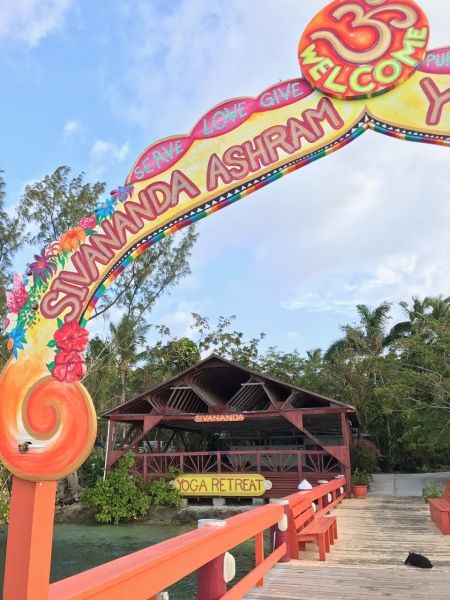 Colorful tents were set up all over the property, and the murals were bright and cheery. The setting was Gilligan’s Island gorgeous, so inviting yet untouched, raw and rustic.  I immediately wanted to stay forever. I picked out the exact little yellow bungalow that spoke to me, the one with the billowy white curtains and perfect view of the crashing waves with its own hammock beckoning in the shade of a swaying palm. 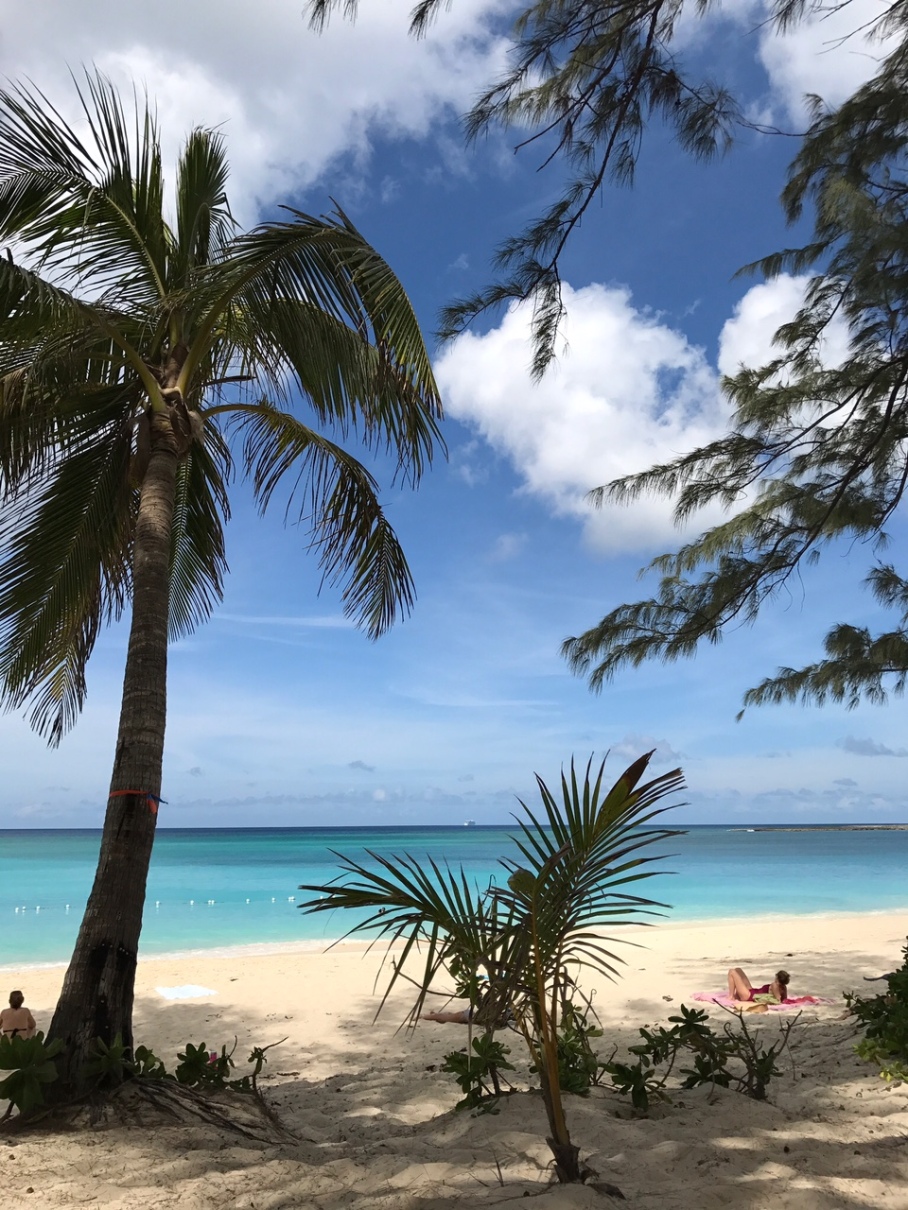 I saw a woman journaling and I could almost feel my inner being growing vicariously. I could just stay and write and find my inner self too. Even the wind and the saltwater was more magical over here.

Instead I vowed to come back for an 8am or 4pm yoga class on one of the outdoor platforms. (I did go back the next day, and it a phenomenal 2 hour class, especially the post class tofu breakfast!) 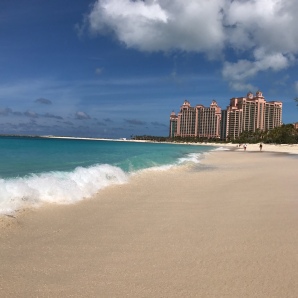 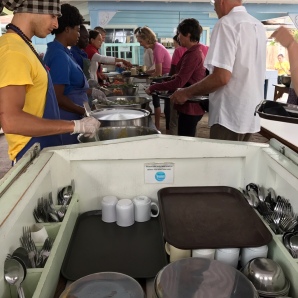 I reluctantly meandered back to the world of spring breakers partying in The Cove’s Adult Pool. Barely clothed bodies writhing around, soaking up plenty of rum and sun and loud music made me flinch at the irony. I saw no “adults” in sight, just teens being given way too much leeway to get into serious trouble.

But I joined the other moms near the pool and smiled and tried to accept this reality. But inside, I was yearning to pluck each one out of that pool and bring them over to the ashram so that they could shavasana and namaste their time away, and eat broccoli for breakfast while feeling their inner beings shine and grow.

But no, the “island mon” rum slugging and bikini prancing continued. And there they would stay, hugging and laughing, hanging onto each other and swaying and singing in the sun, in a haze of rum.

So I nibbled at my club sandwich and nursed my Bahamian beer in submission. All the seasoned chaperones seemed relaxed, over their conch salads and Bahama Mamas, looking the other way through their mirrored sunglasses, condoning this reality. And I was no better, no better at all.  I was right there in the middle of it, not speaking up.

But I had a very bad pit of worry inside my gut the whole vacation, and it worsened every time I texted Jeffrey, but got no answer. My pit, this feeling of dread, shrunk ever so slightly each time we chaperones gathered together to commiserate. Diffusion of responsibility was hard at work there. The news of a dear friend’s college deferral hit us all hard and lots of hugs and “I’m so sorry’s” echoed across our beach chairs in the Disney-esque setting. 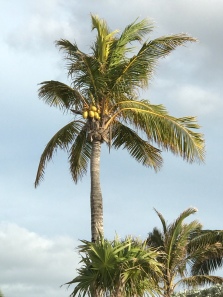 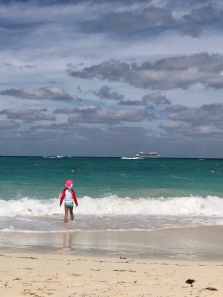 After I swam to the ashram the next afternoon, we saw a girl in the adult pool being held upright between 2 friends. Her eyes were big and glazed over, and she was clad in a teenie weenie bikini and weighing in at no more than 90 pounds. I approached, an uninvited boxing trainer at the bell, offering non-judgmental parental help. She was in bad shape from drugs or alcohol or a mix, but her friends immediately clamored, “ Oh don’t worry –she’s like this every weekend,” and dragged her off, and my pit grew, making my knees weak.

The next day I got a text from a fellow chaperone that my son had gotten hurt and was on his way to the hospital.

My pit tripled in size and I raced to find the right hospital. From a series of texts from fellow chaperones it became apparent that he was at Doctor’s Hospital. I pulled up in a taxi and as soon as I laid eyes on him my pit disappeared. He was hurt, but he has okay. The dread and fear that made up that pit was gone. I had my son with me. I got this. I can help. I can finally help my child out instead of just sitting helplessly on the sideline (albeit a sideline with turquoise water and pretty palm trees) while he parties with the other privileged teens.  I swung into medical advocate gear and got him through the x-rays and the doctor assessment and the splint.

I was so relieved that I was there in person to help him. This, this was why I’d come. We were both definitely upset, but we were also both thinking it could have been so much worse. I’ll take this sprained thumb of his over the countless other possibilities that could happen here in this crazy teen party scene.

Then we got him back to the hotel and he rejoined his friends and I was immediately invisible, (and helpless and useless) once again. So I took my lame duck self to the straw market downtown for a quick souvenir acquisition of cigars, rum, rumcakes, straw hats and knick-knacks. 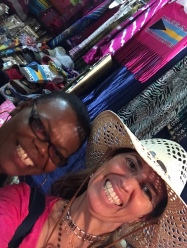 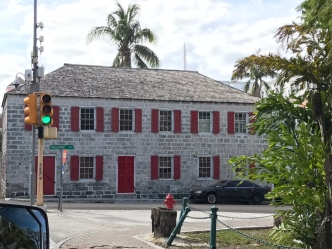 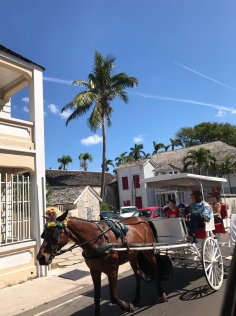 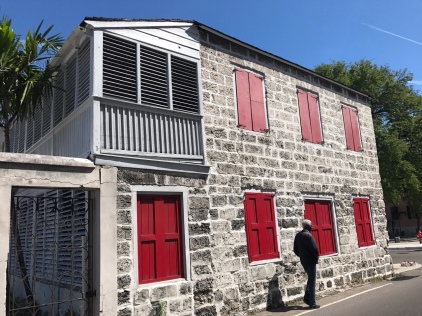 While I was about to look for the infamous fish fry, still feeling shaken up from the hospital jaunt, my phone started pinging: a boy in attendance at another fancy private school was in rough shape from way too much alcohol. He had apparently been taken to a chaperone’s room to recover. My pit regrew and I raced back to the hotel. How can all this partying, with its pitfalls and dangers, be so outwardly condoned by us parents? My presence here was an act of pardon, and it made me feel like a failure as a parent. We were supposed to protect our children from all of this, not sign them up for it and take a plane ride to partake!!

Thoughts of the ashram, the boy, the girl, the hospital, the waitlist, all ran through my head as I watched the sun set. 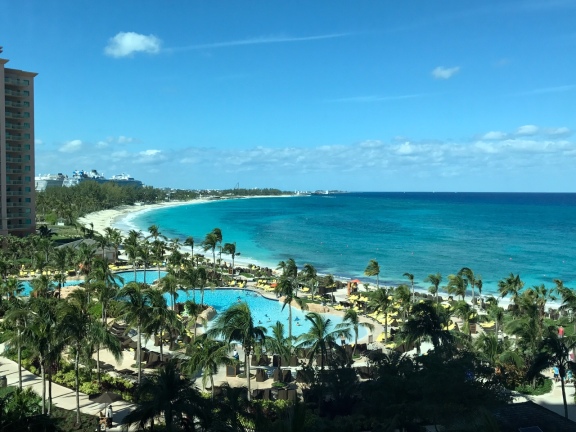 Yes, it was beautiful, but my discomfort at what we were allowing as parents to occur was eating away at my insides. The pit was gargantuan now. Why couldn’t we all just enjoy the Water park and Dophin Cay together, or maybe even some snorkeling, or perhaps a round of golf?

So, I walked into Nobu at Royal Towers on our last night to meet my fellow chaperones in sympathy, and to celebrate that the 3 day trip was almost over.

After dinner, well, I admit, we tried our hand at the casino. It was hard not to get sucked in. We tried poker then blackjack and had so much fun winning and losing and ultimately walking out of there at 2am with an extra 780 dollars in our pockets. We felt pretty good.

But wait, I digress, don’t we owe it to our teenagers to be better role models? To teach them that this all isn’t really ok? Somehow the reigning ideology is this: “they are going to do it anyway so let’s just fly them first class to a place where 18 is the legal age to drink and gamble and we will let them loose there.” How did this even become a thing? ARGH!!

So for anyone thinking of going on spring break with their teen in this manner, well, I hope this story helped shed a little color on the experience. Forewarned is forearmed. And be prepared for the moral alarm bells to ring loud and clear.

The straw bags and sunshine just weren’t worth it. 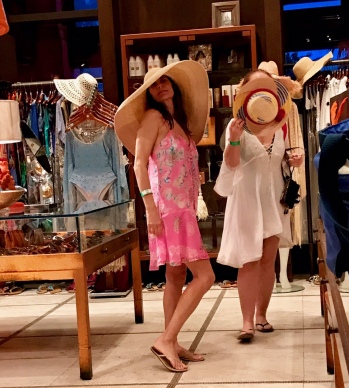 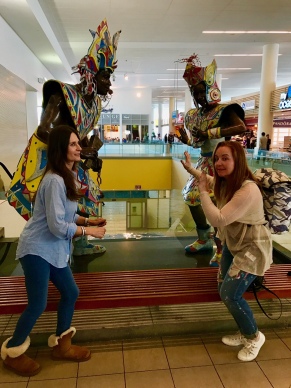