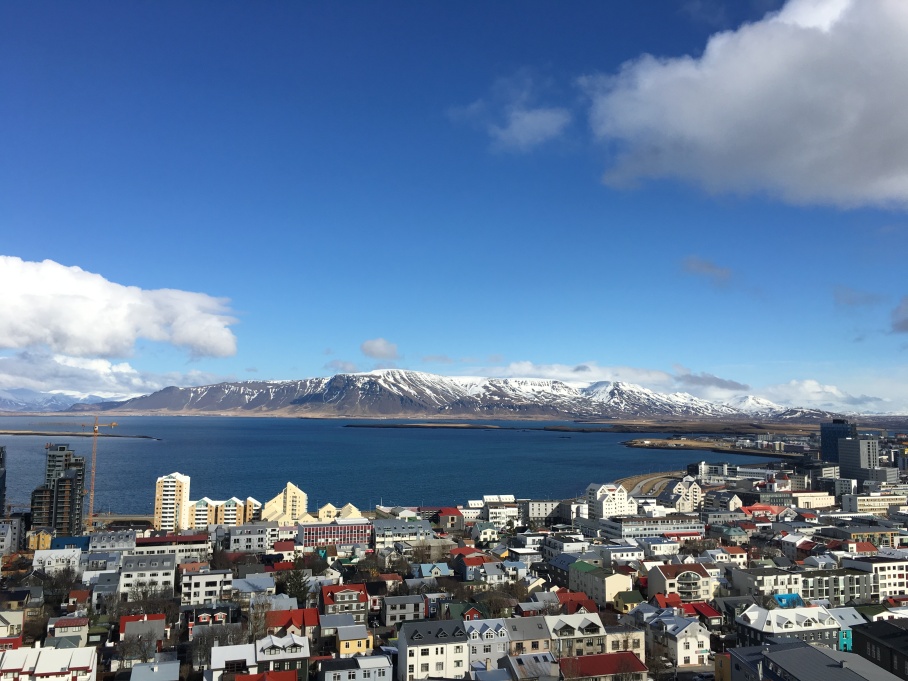 I spent my 47th birthday feeling insignificant in Iceland. As we walked on glaciers, stood inside rift valleys created by continental tectonic plate shifts

we were reminded that the Earth is still very much in charge.

When  Eyjafjallajokull erupted in 2010 it caused a 2 week halt to air traffic. According to our guide “if an eruption were to occur like the one in 1875, air traffic and satellite communications would come to a halt for over a year.” This is just one example of why Iceland’s unpredictability, both below and above ground matters.

Why did we go? Well, this was the first time that the 3 schools our teens attend had a spring break that matched up, thanks to Easter being so early this year. And Iceland had been put on my “places to go” radar in 2008, by some friends who sang it’s praises, mostly for its thermal pools and nightlife (not for it’s financial stability at that time).

But the real reason it finally got booked, I’m happy to say, is because our son, a junior at King School in Stamford CT, was accepted to attend a “Global Student Leaders Summit on the Science of Sustainable Energy” for high school students over his spring break. It sounded pretty intense when I first heard of it, but after a failed attempt at being waved in as a chaperone, I decided that an educational Icelandic Spring Break was in order for all.

So, while our son worked feverishly at the summit, debating the best long-term sustainable energy solutions for the planet, we gave our two teenage girls virtually the same itinerary, but without the Icelandic Presidential-presiding and the Standing Room Only debates at the Hilton.

We took Delta’s easy overnight flight and eased jetlag in a matter of minutes by going straight to the Blue Lagoon to float in the naturally fed 102 degree milky blue water and marvel at its geological magnificence. The high silica and salt content made our skin silky smooth and our attitudes improve. So much so that we sprung around like hidden elves huldufolk among the spongy and moist moss-covered lava rocks.

The next day was March 20th, my birthday, and it was a 17-hour day spent with “Karri,” our Icelandic guide from IcelandGoTours, who was a total sweetheart and a lifelong mountain climber. He took us by fat-tired Landcruiser along the entire southern coast, where we ooh’ed and ahh’ed over its waterfalls, 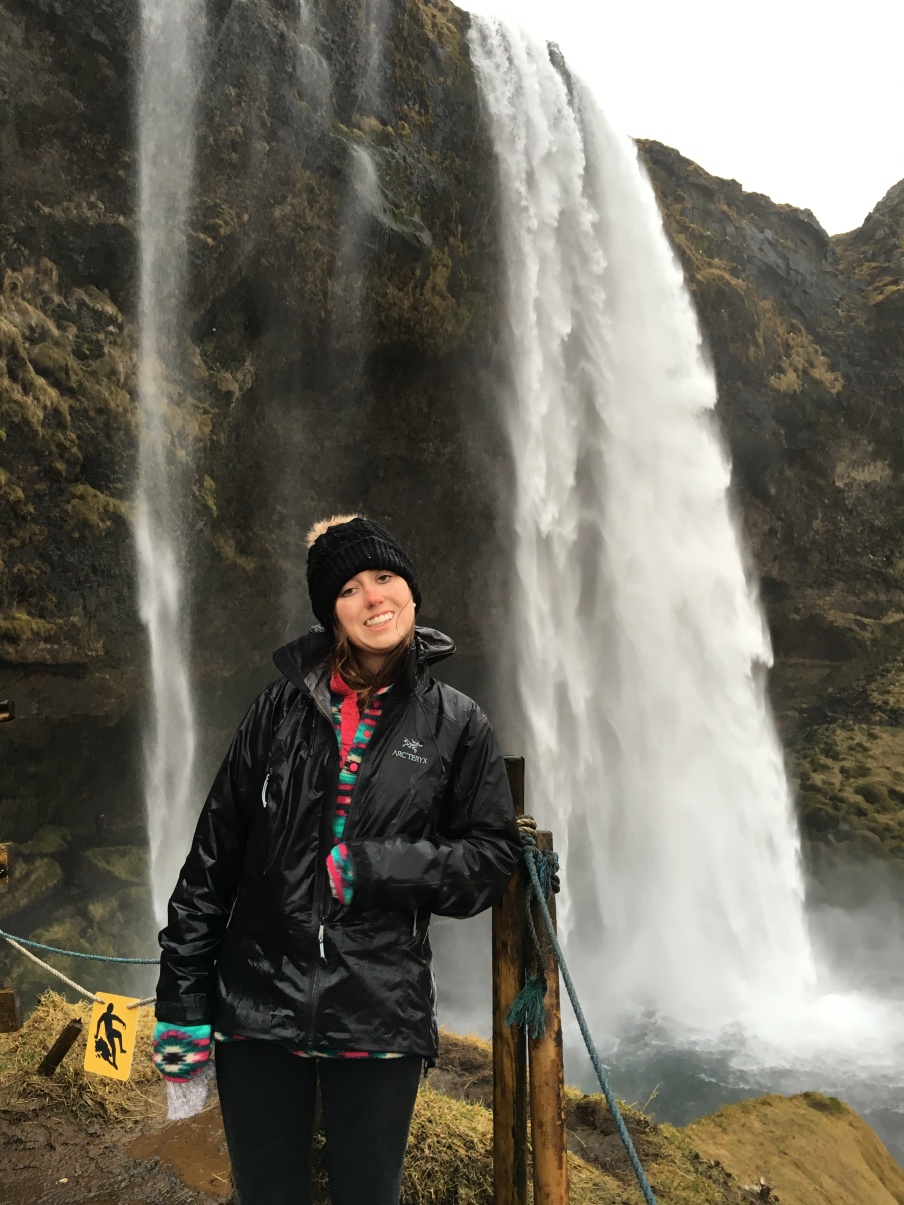 We made it as far as Glacier Lagoon Jokulsarlon.

The raw beauty and high winds of this glacier-fed lake full of seals and icebergs literally blew us away. 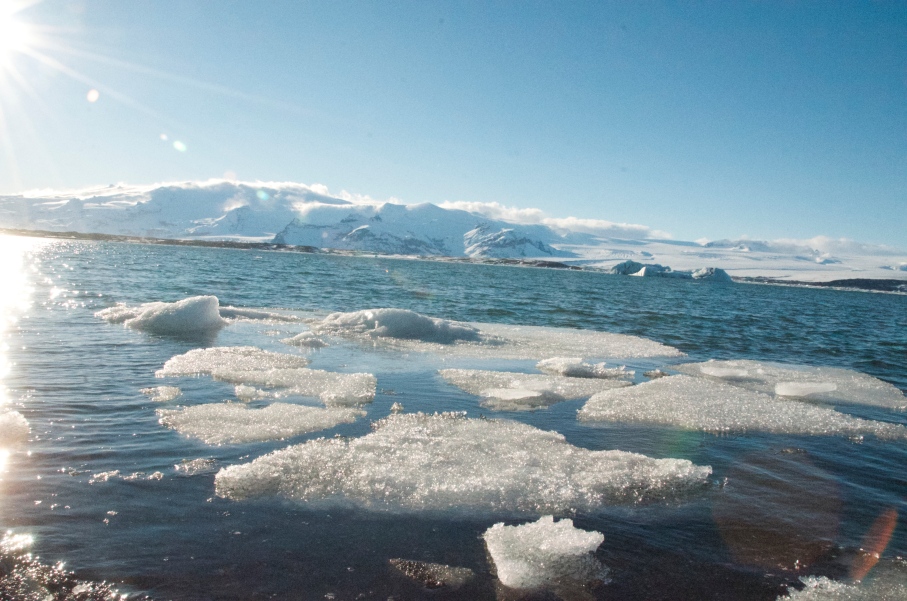 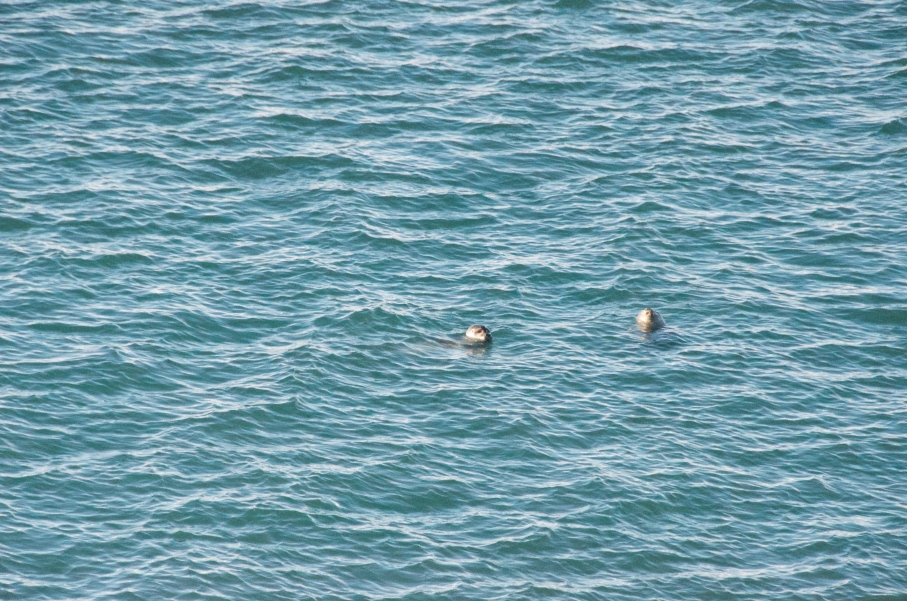 This was an extremely aggressive day but certainly a memorable one. Karri {who we called Kelly all day long because of 1- his Icelandic accent 2- our American rush 3- his relaxed Icelandic ways } took us to Svinafellsjokull glacier.

While we were admiring it, he told me to check out his Facebook page to see the dramatic change in the glacier just since this past Christmas. I was shocked by the difference that I saw. We clearly need to do whatever we can to slow this process down. After spending the afternoon with my new glacier and friend, it felt personal. I cared more. I felt more protective than when I’d just heard talk of “glaciers receding” in the past.

My mind wandered back to my days serving on the Environmental Committee at Midland Elementary, where my fellow “save the earth” devotees and I posted signs and handed out car magnets that encouraged clean air awareness. “Turn Your Engines Off” we begged fellow moms. In other words, “stop emitting CO2 into the atmosphere because it’s bad for our kids to breathe and it’s making global warming worse.”

If only we had taken the whole school on a trip to Iceland! That would have sent the same message that we spent a year trying to get across. This country is just so far ahead of the curve and such a powerful global role model when it comes to environmental intelligence. They are clean, green and full of sustainable energy solutions. Those geothermal power plants and naturally powered greenhouses we saw were powerful sights to behold and most certainly a harbinger for the rest of the world. Icelanders, who are a mere 330,000 in total, most definitely live as pioneers at the frontier of climate change. 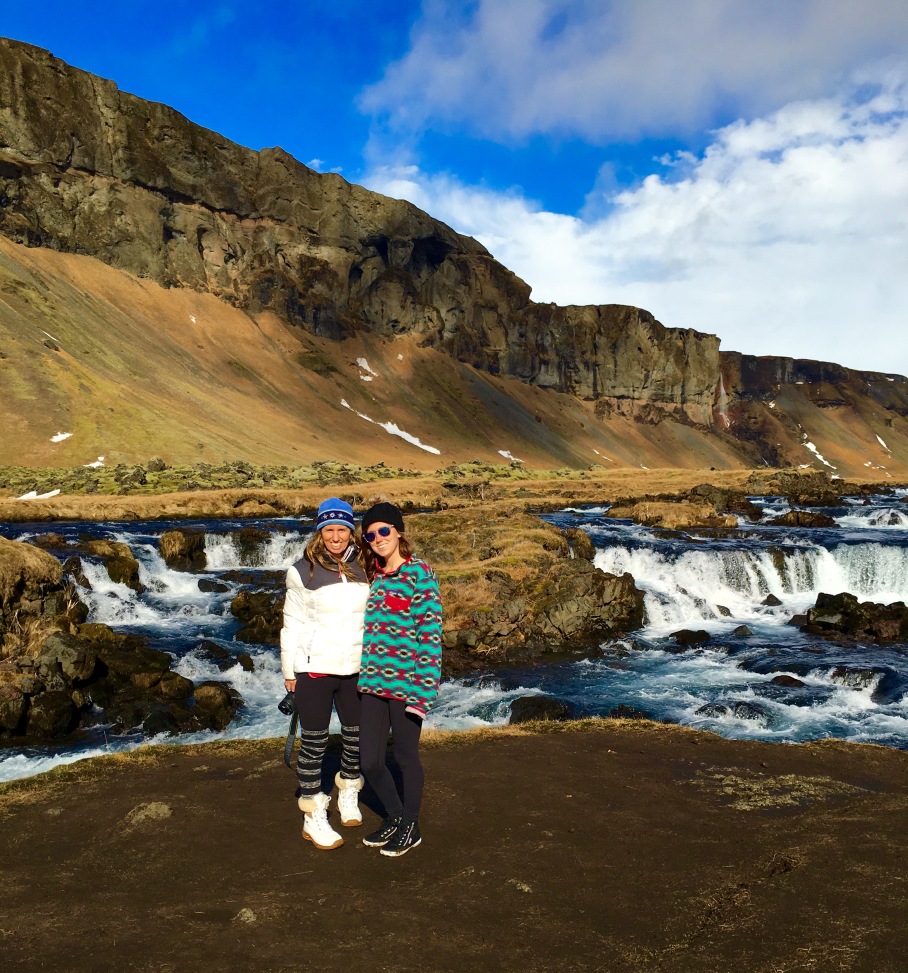 Karri (Kelly) had tried 2 nights in a row to help us find the Northern Lights. Bless his heart. We left without having seen them, but those long hours of staring into the dark skies with hope and wonder were peaceful moments of connecting to earth and to each other, nonetheless. The day after our marathon journey to the Glacier Lagoon, he handed me a bag saying “it’s your birthday present.” The bag contained an Icelandic wool sweater his sister had knitted. Honestly? I was speechless. That is just how this country and its people operate though, and I was so touched.

Our final day, we went out on a total high: ascending by Nordourflug helicopter allowing an aerial view of the largest waterfall in Iceland, then touching gently down on Langiouull Glacier. 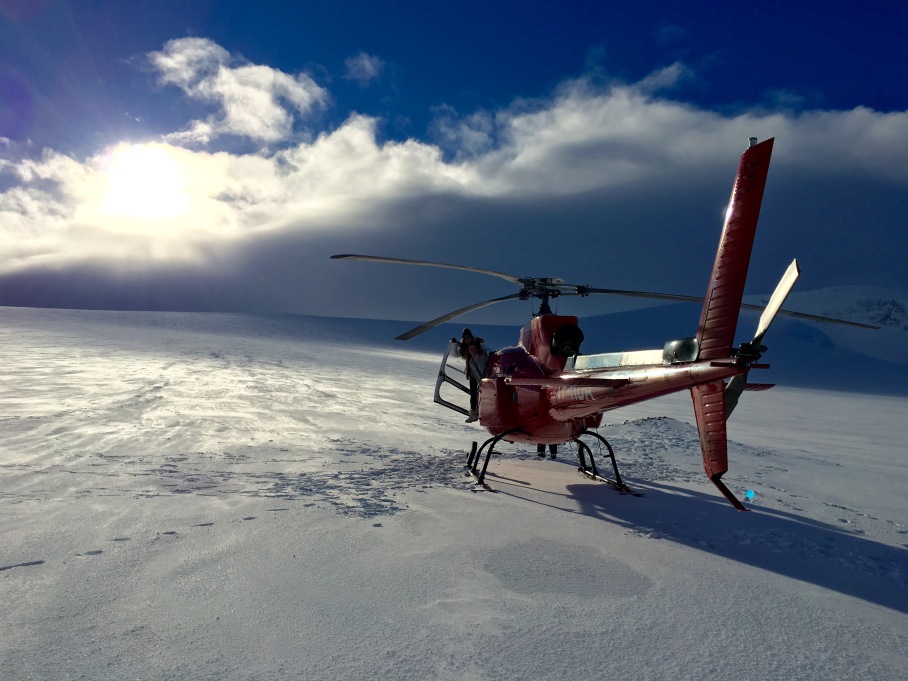 We wandered around it feeling somewhere between astronauts and angels.

Then we landed back in Reykjavik only to ascend the hallmark tower of Hallgrimskirkja church. Gazing out at all the colorful houses and snow capped peaks in sunny splendor, it felt like I was inside a fairy tale or possibly a snowglobe. 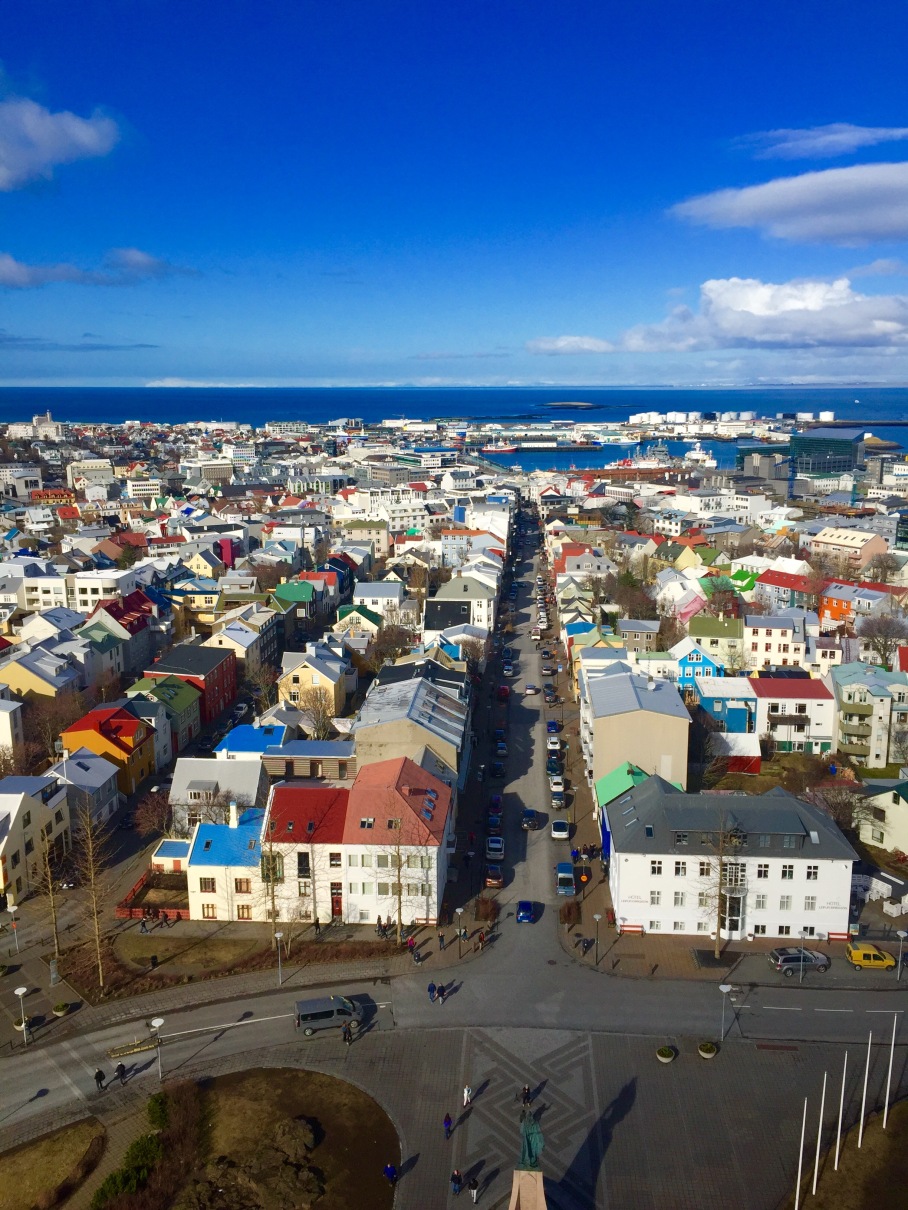 Either way, I did not want to leave it, in spite of the omnipresent sulphur smells and fickle wet weather.

We ate a sensational lunch of grilled cheese and tomato soup, spinach crepes and nutella cheesecake at Café Babalu,

run by a long time expat from Long Island, whose Cheshire grin left me oozing with jealousy at his Icelandic expat life. Then I ducked into Elinborg for fishskin bracelets and unusual woolen neckwarmers. They would go very nicely with my new Icelandic sweater and that Nanook of the North fur hat (with earflaps) it had felt so imperative to purchase here.

Reykjavik is such a tiny but vibrant city. It’s so easy to manage even though it holds ¾ of Iceland’s population. After the first day our 8th grader knew her way by heart to the ice cream and crepe shop in the center of town and was comfortable going there by herself. Meanwhile our senior daughter had brazenly tried out Prikid, a nod to the infamous Icelandic nightlife, and we had all gotten very comfortable wandering up and down the little streets of this adorable European-esque town. Our favorite restaurant experiences were by far Kol and Grillmarket (Grillmarkadurinn), where I succumbed to eating puffin and whale, but put my foot down to putrified shark. Overall, the food we had in Reykjavik was so fresh and extraordinarily good, especially that homemade Rye bread they served everywhere.

We resignedly checked out of our super convenient, understated and inexpensive Hotel Odinsve, whose concierge help was invaluable with booking tours. (And I could not recommend the 4th floor more, with its exquisite city and harbor views.)

As we stepped into our taxi, as if on cue, a hailstorm erupted, but then in true Icelandic form, it lasted all of 5 minutes, before changing to brilliant sun and rainbows 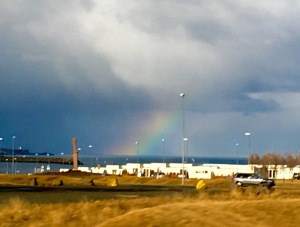 the whole journey back across those lava fields to the airport. I must admit that I did start thinking of elves and trolls and pots of gold.

As I hustled through the airport after a last minute “Buy Iceland Frenzy,” I was called over the loudspeaker to the information desk, apparently my credit card had been found (I hadn’t even noticed it missing). This place is unreal. Then a few minutes after that, as I was leaving the ladies room, a laptop was discovered by the sink and I found myself fighting it out with 3 other ladies over who would bring it to the information desk. Then as I stood in line at passport control I received an email from Hotel Odinsve saying they had found a few of our shirts and could they please mail them back to us. Seriously?

This place clearly brings out the good in people. Is it Utopia? I began to wonder. Maybe it’s the air that makes everyone behave and act right, which, thank God, I brought a can of back with me, appropriately entitled “Fresh Icelandic air.” If only it was that easy to carry Iceland’s ingenuity and sensibility back home to New York.

When we passed through security, I realized how full we’d become here in Iceland: full of pure air, clean water, fresh fish, and oddly enough, lamb hot dogs (very famous). We also got our fill of adventure, but much more importantly we got our fill of geological and climate awareness. Iceland is certainly an awakening. It holds the power to press the reset button on those who come to visit.

I boarded the plane with a few final thoughts on this primal, almost prehistoric, nation that’s come a long way from its Viking past to its feminist present. With free healthcare, free education, almost no crime, high life expectancy, low barriers to entry, a high literacy rate and very low taxes, Iceland has ample appeal. Add on to that, a robust outdoor lifestyle, adorable Icelandic horses to ride, whales to watch, mountains to climb, plus the serenity and health benefits of year-round outdoor bathing and it certainly makes a lot of sense to live here. 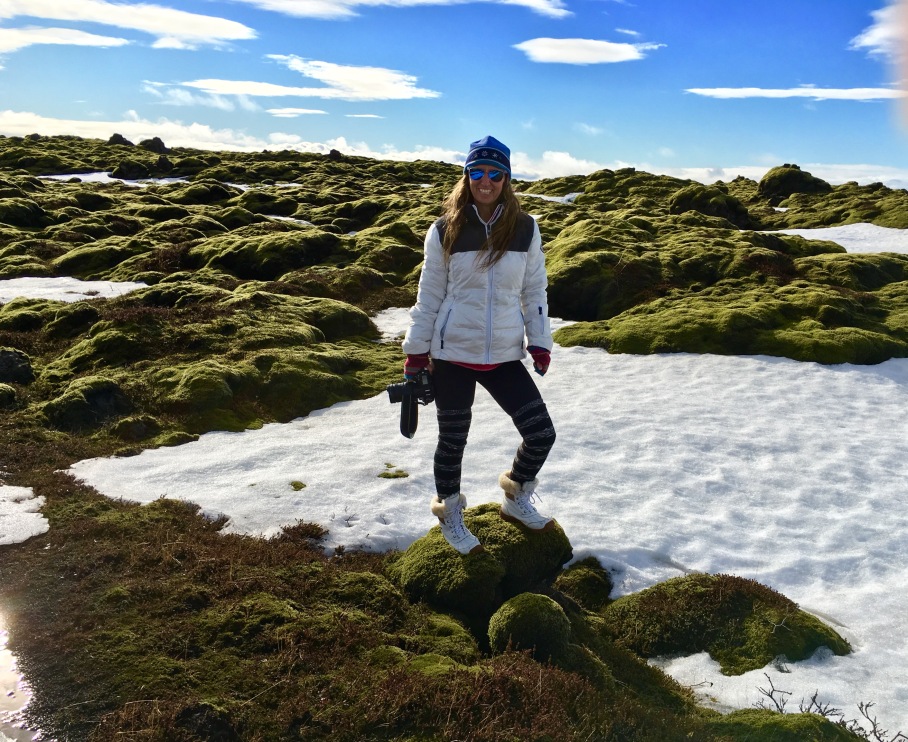 And someday, I just might. But for now, I’m vowing to return, if only to chase down those elusive Northern Lights.