Puerto Rico has a bad rap. My thoughts while booking my late November trip were “not exotic enough, not shi-shi enough.” It’s true that it’s not St. Barts glam nor Carribean glitz, or even BVI’s ooh-la-la. But what it does have, I discovered, is quite a lot. For starters, it’s got the ease of a JetBlue direct 3 1/2 hour flight (albeit a red eye) to Aguadilla. It’s got a hard to beat all around price point that is hard to ignore. It’s got uber-inviting warm water, tropical breezes, swaying palm trees, coconuts and dive-bombing pelicans galore.

And in west-facing Rincon, it’s got sunsets, those gorgeous orange-sizzle-dropping-into-the-watery-horizon kind that demand an audience and maybe even an applause. It’s got surfing, for every surfing level, and when that loses it’s appeal it’s got incredible scuba diving, pretty pastel-colored houses, and forests complete with waterfalls and zip-lining. It’s got plenty of shopping, nightlife and rustic restaurants with really great food.

But I came to Rincon to surf. And I was not disappointed. Not even close. The waves were big and strong on Day One and I was challenged for sure, with my heart beat racing even long after I got out of the water. 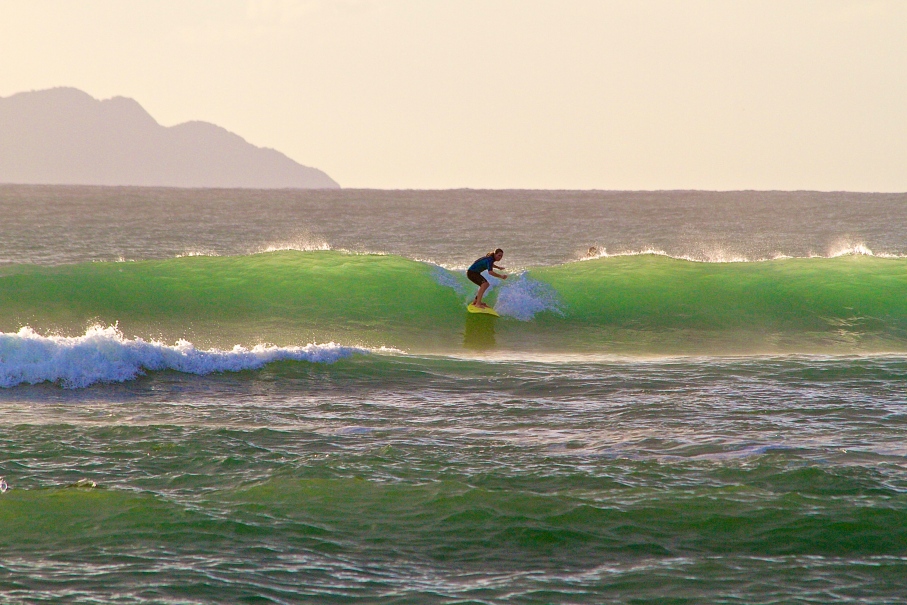 On Day Two, it backed off a bit, and I had some really great rides until my run-in with a bad combination of some shallow water and a coral reef. The bleeding eventually subsided, and I rallied later on for an epic sunset surf session. Camaraderie in the line up is notorious, but with that sun sinking low, giving our little surf group a golden glow, it was especially magical.

Surfing in that warm, clear water with turtles popping their little heads up around us, coral sea fans gently sashaying with the current a few feet below us and brown pelicans dive-bombing prehistorically overhead. What a rush. The thrill of being out in that water is hard to describe. But I will try. Each wave is a gift of adrenaline wrapped up in layers of nature, empowerment, gratitude and feeling more alive than at any other time in your life. But each wave is also what you make of it, and it takes guts. 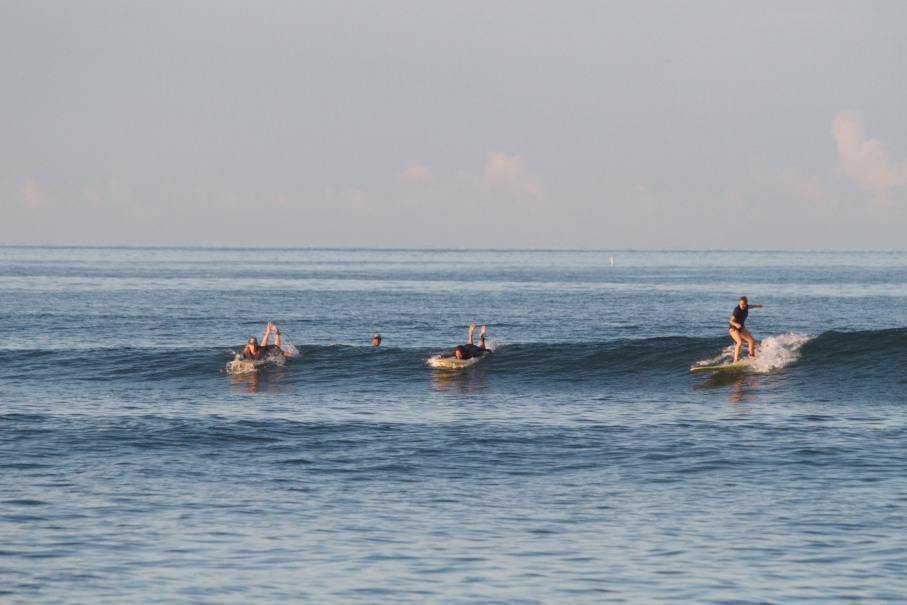 It can be intensely humbling and painful to be at Mother Nature’s mercy. To be pushed to the ocean floor waiting for the third wave in a row to churn above you before you can come up to breathe again, even though you already swallowed water and your gut is hurting from holding your breath too long. To have the wave wallop you and then whip you about like a rag doll, knocking your board against you.

You feel foolish. You feel hurt. You want to cry and paddle to shore to lick your wounds, as you push your wet, salty hair off your face and pull your limp body back onto your board. 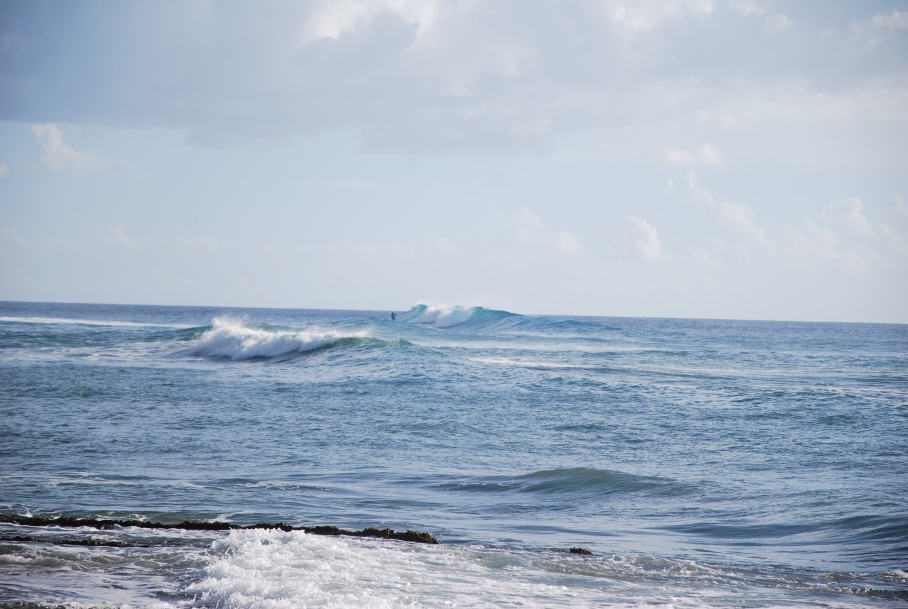 But instead, you find yourself inexplicably paddling back out, to catch another wave, like a masochist or an addict, you can’t tell which, and you don’t really care. Fear mixes with adrenaline in such an intoxicating way, and you are hooked, and headed back for more. You will “teach this next wave a lesson,” you think. But in reality, the more you surf the more you come to realize that every single wave is a lesson and a gift. You never do teach that wave a lesson. The wave is always going to be the lesson giver, and the gift giver. Always. And that, surfers come to realize, is the ocean’s way of giving those lucky few a path to pure life. Surfing is definitely a religion and I’m a disciple, no question about it.

On our third day in Rincon, the early morning surf session was perfect, but somewhere between the late morning siesta and the meandering beach walk to a lunch spot for smoothies and salads, the wind picked up and turned the waves to chop.

Wave-gifts gone, we headed to Tamboo, which has a super, 2 story deck that hosts a lively Happy Hour overlooking a wide stretch of beautiful white sandy beach. 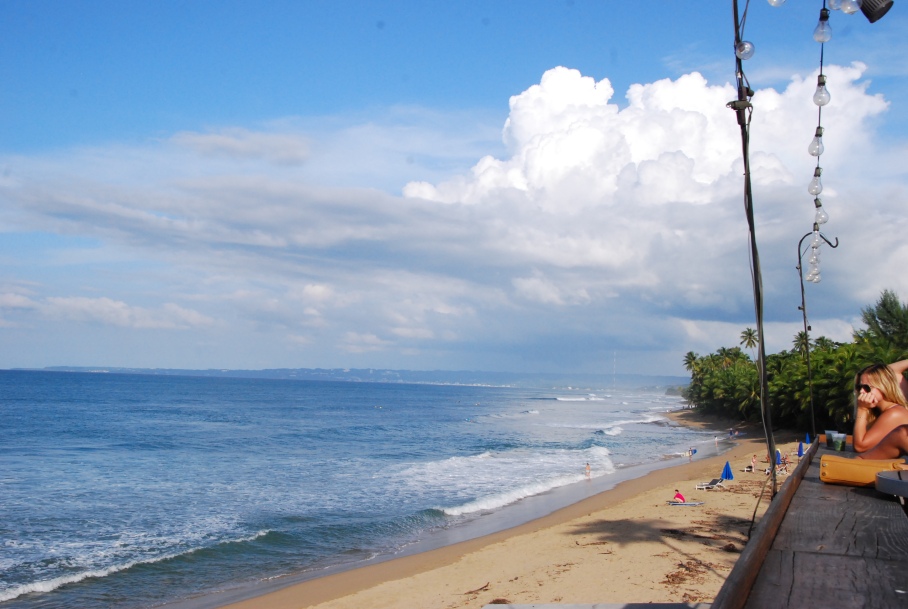 Shopping for sea glass jewelry and swimming in riptide waves became the afternoon’s activity. But the two surf Gods of our group, Corey Senese and Tom Casse (of Corey’s Wave in Montauk), began to froth as they took note of the steep waves over on this side of the peninsula. They whipped out their short boards from the trunk of the rental car with a glaze forming over their eyes. Then, like two water creatures returning to the sea, the two took flight as they sprinted from the beach to alight on the breaking waves at Sandy Beach.

“They are not human,” I thought. But photos taken of them time and again prove that they are indeed just men, but men capable of soaring high above the waves like acrobats.

The feats they pull off are impossible spirals into the air propelled only by the power of steep strong waves. They have somehow found the ability to harness all of the ocean’s energy and allow it to catapult themselves at incredible angles, along with their unattached boards, high into the sky. Physics laws need not apply. 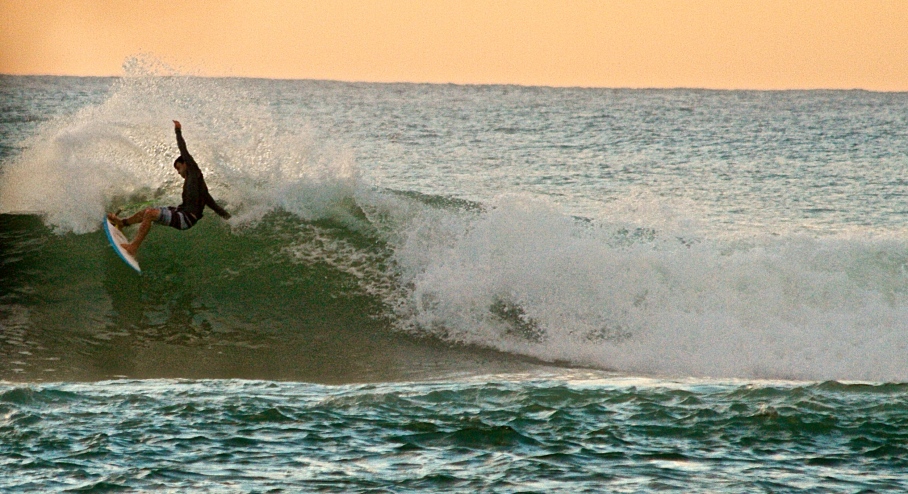 The waves launch them and they are airborne at times 15 feet above the crest. Then somehow, they miraculously land back on that same wave, to continue riding it, to continue the impossible.

The forces at work all defy gravity. The beauty is astonishing. I catch my breath every time I see it. I can’t watch, but I can’t look away. They are connected to the sea in a way I want to be, and I count myself lucky to know them and to call them my friends, and my teachers.

Our little group of  long-boarders here to Rincon is filled with passion-filled, creative souls connected by a mutual love and respect for this out-of-body experience called surfing. 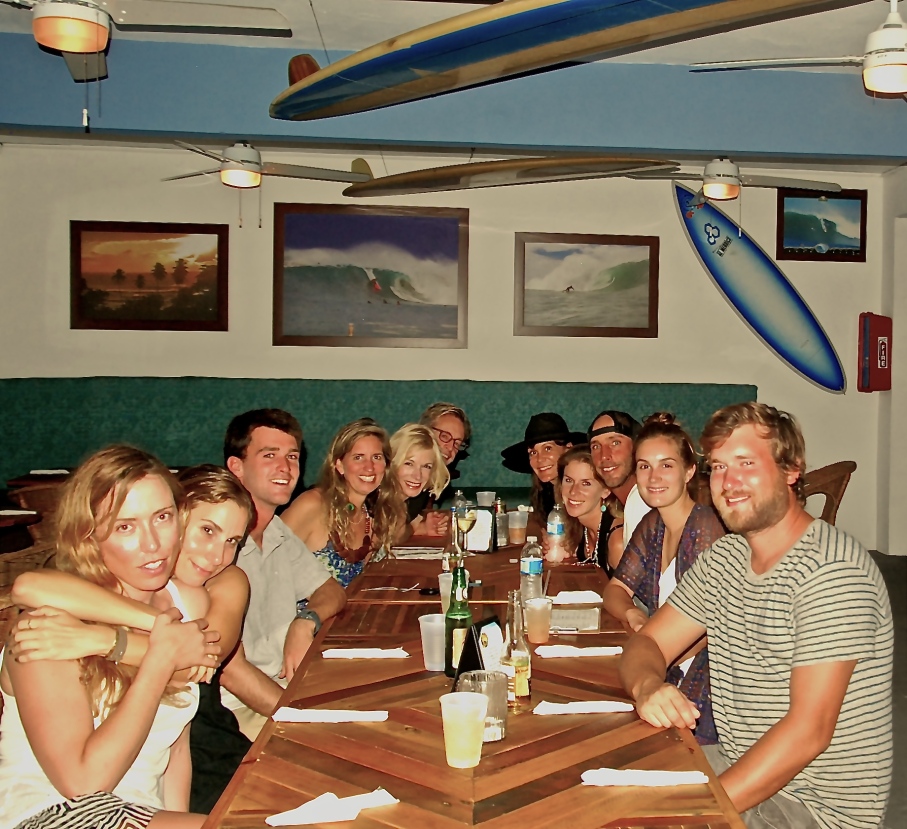 And the surfing community in general is so tight-knit because it is built on the recognition and acceptance of one gorgeously crazed and glazed surfer soul to another. But these two men I call friends are on another plane entirely. And so I sit in the sand, jaw dropped, in awe of their mastery of the sea, a mere witness to greatness. 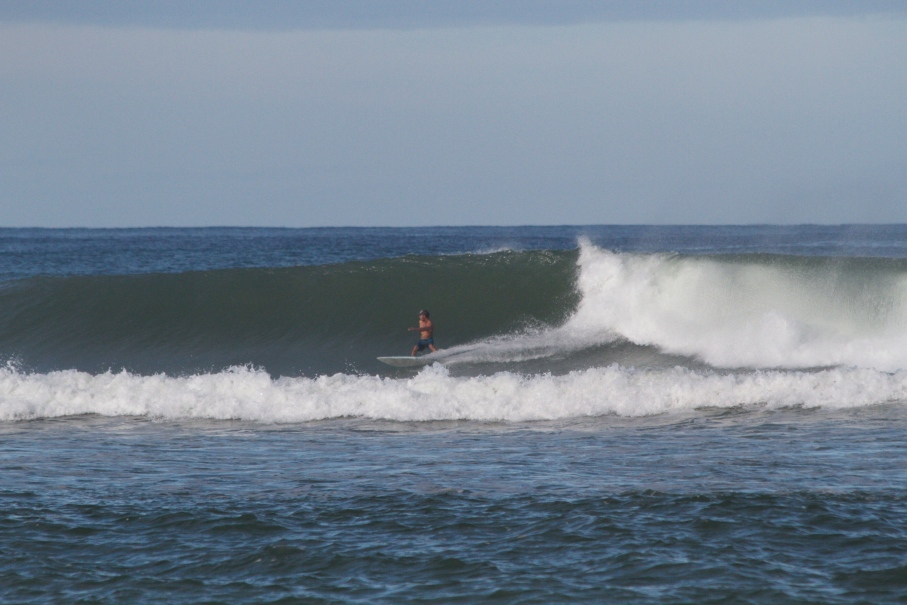 Day 4 began with a shocking glimpse at 6am of the harvest moon setting into the ocean’s horizon, followed by a quiet and serene sunrise surf session on gentle, glassy waves. What a safe and easy way to end the trip before heading to the airport for that quick JetBlue flight home, taking my Rincon Reef Rash souvenir with me.

Goodbye Surf Gods, Rincon pelicans and coral reef fans. I will be back. Guaranteed.